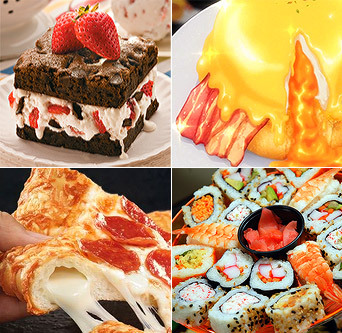 Rated M for mmmmmmmmmmh.note Top right image from Food Wars!.
"Good food is like music you can taste, color you can smell! There is excellence all around you. You need only be aware to stop and savor it."
— Chef Auguste Gusteau, Ratatouille
Advertisement:

The second has probably existed forever, but the first is a trope primarily popularized by the modern Cooking Show, advertising, and other visual media where the food is the main focus. In visual media, the presentation goes beyond edutainment or straightforward depictions of the food and tantalizes the viewer with careful close-up shots of artfully arranged dishes or the pristine appearance of their raw ingredients, choreographed action shots of its preparation and accompanying moans of pleasure produced by the people eating them. In written media, the same can be accomplished by writing at great length about the food in a similar manner.

Alas, as in real porn, many of these orgasmic delights are photo shopped or faked some other way. This is especially true in commercials,note though by law they have to show the actual food being sold; the cereal may be real but the milk is white glue, the lettuce in the burger is protected by a hidden piece of cardboard... but it is also necessary: under hot studio lights, frozen foods will melt, hot foods go cold, cereal gets soggy, veggies wilt. Cooking shows, cookbooks and food magazines, on the other hand, will generally show you the real deal, even though it has been gone over by a stylist to look as good as it can. If you've ever puzzled over the term "food stylist" in credits, that's what this person does.