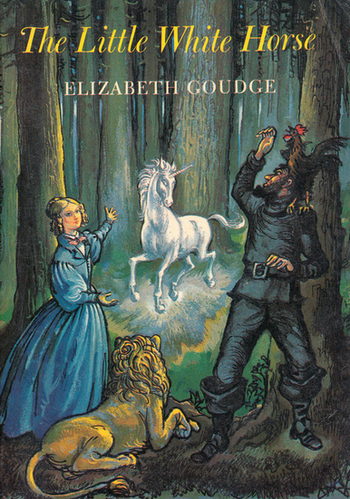 The Little White Horse is a classic of children's literature, written in the 1940s by Elizabeth Goudge. First published in 1946. The events of the novel begin in 1842.
Advertisement:

After her father dies in debt, Maria Merryweather and her governess Miss Heliotrope go to live at Moonacre Manor with Maria's uncle Benjamin.

While there, Maria learns all about her family's history, and discovers that she is the last in a long line of Moon Princesses, and that it is her destiny to reunite her family with the evil De Noirs.

Has been adapted into both a live-action TV series, Moonacre, and a movie, The Secret of Moonacre. The latter was directed by Gabor Csupo of Bridge to Terabithia fame, and while it is an enjoyable movie in its own right, it plays up the more overt fantasy elements of the book with Maria now having to force the two families together, before the 5000th moon since the curse was laid upon the family destroys Moonacre Valley. It also eliminates any reference to Old Parson (or the surrounding village) and re-tools the character of Robin into being the Big Bad's son. Oh, and it has Tim Curry as the Big Bad, Coeur de Noir.

It is also noteworthy for having been a favorite book of J. K. Rowling as a child.

The book and its adaptations show examples of:

Alternative Title(s): The Secret Of Moonacre