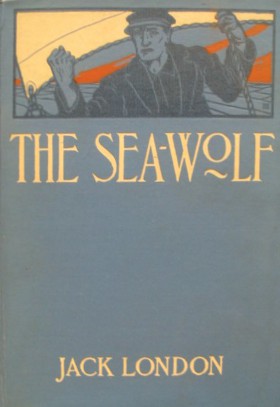 The Sea-Wolf is a 1904 novel by Jack London. It can be described as a psychological adventure novel which gets most of its tension from the conflict between two characters with spectacularly different world views.

The protagonist is literary critic Humphrey van Weyden, a physically weak intellectual with a strong sense of justice and a very optimistic, albeit initially not very thought-out ideology about inherent good, altruism and the immortality of the soul. He was born into a rich family and relies mostly on his father’s inheritance, although his job provides him with an income of his own. At the beginning of the novel, he gets shipwrecked and set adrift after the ferry he was traveling on collides with another ship and sinks.

He is rescued by Wolf Larsen, captain of the seal-hunting schooner “Ghost”. Larsen is the absolute antithesis to van Weyden’s passive benignity. As captain, he rules over the crew of the “Ghost” with an iron fist, brutally beating everyone into submission who dares to defy him and humiliating people for his own amusement. Instead of returning van Weyden to the shore, Wolf Larsen forces him to become part of his crew.

While trying his best to adapt to the harsh new environment, van Weyden discovers that there is more to the captain than blunt, animalistic brutality. Wolf Larsen is an autodidact; he taught himself reading, writing, biology, astronomy, physics and a number of other things and developed his own nihilistic philosophy, heavily inspired by Nietzsche and social-Darwinism.Van Weyden and Larsen often engage in long philosophical debates during which “Hump”, as the captain calls him, has to defend his own ideology against Larsen’s hedonistic world view.

While Wolf Larsen does humiliate and occasionally beat van Weyden, believing that the harsh treatment will help the spoiled young man to learn how to “stand on his own legs”, he also shows him favoritism because he is the only one on the ship who can provide Larsen with intellectual stimulation.

During his stay on the “Ghost”, Humphrey van Weyden grows stronger in body and spirit, but he stays wary of Larsen, whom he sees as a monster and whose immense cruelty he finds appalling.When the “Ghost” picks up more castaways, among them a female poet named Maud Brewster, the conflict between van Weyden and Larsen grows more dangerous as both men feel attracted to her.

Jack London originally wrote the novel as an attack on Nietzsche’s Übermensch-concept. It has been adapted for movies many, many times (8 English-language films, 3 German ones, and an Italian and a Russian version, respectively) and is mostly remembered for the character of Wolf Larsen and his relationship with Humphrey van Weyden (described as similar to that of a king and his jester), while the love story that unfolds between Maud Brewster and Humphrey van Weyden and their subsequent escape to a deserted island has been deemed cheesy and absurd even by contemporaries.

Adapted as a 1941 film directed by Michael Curtiz and starring Edward G. Robinson as Larsen.

Adapted again as a rather Darker and Edgier (which is saying something) 1993 film with Charles Bronson as Larsen and Christopher Reeve as Van Weyden.

Adapted again as a 2009 miniseries with Sebastian Koch as Wolf Larsen, Tim Roth as Death Larsen, and Neve Campbell as Maud.

The Sea-Wolf provides examples of: