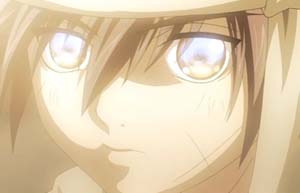 Shiny!
"I must admit that I'm still not great at interacting with young men. But I think I am finally able to speak to Master Link while looking him in the eyes! Those wonderful eyes... Naturally I still get a little embarrassed... but I can't help it! I always follow his gorgeous gaze with my own. I blame his beautiful blue eyes. Ugh. This is all so strange..."
— Paya's Diary, The Legend of Zelda: Breath of the Wild
Advertisement:

This is where a character has very unique, "beautiful" eyes. These eyes are one of their main defining characteristics, and many people become enamored with them because of it. Maybe their eyes are an unusual color, or perhaps it's a very piercing, striking hue of a color. Or possibly, their eyes have very pure, untainted emotion inside that other people can clearly see. Whatever the reason, these eyes will be known for being gorgeous and special. In fact, characters will many times come out and tell them that their eyes are beautiful. Occasionally, the character themselves will hate their own eyes because it makes them "different".

"The eyes are the window to the soul" may be a factor.

See also Gaussian Girl, a type of picture that emphasizes the eyes. This trope is the bolder cousin to When She Smiles. The page name isn't meant to imply a threat. Probably.