Fanfic / What Rainbows Are Made Of 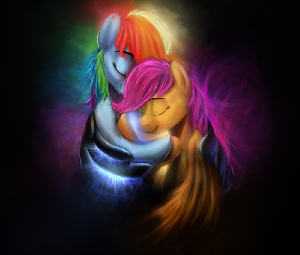 What Rainbows Are Made Of

is a My Little Pony Friendship Is Magic Fan Fiction, originally written in Russian by Silver Fox, translated by LinesPrower.

Scootaloo is about to take her final exam at the Flight Academy. Nervous about failing, she has a horrific nightmare about the Rainbow Factory. However, with a little reassurance from her friend Orion, she aces her exam. Eventually, Rainbow Dash invites her to the Factory for real; she's even asked to take part in the rainbow-making process. Fortunately, Scootaloo has nothing to fear.

The story is a re-write of Rainbow Factory, an infamous grimdark story.

A live reading can be found here.