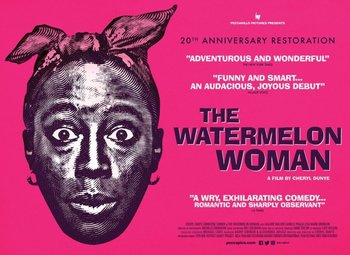 The Watermelon Woman is a 1996 film directed by Cheryl Dunye. It centers on the director As Herself investigating the life of a mysterious Black actress from the The Golden Age of Hollywood, credited only as "the Watermelon Woman". Intercut with her quest are scenes dramatizing Dunye's own life working at a video store, hanging out with friends, awkward jobs filming events for hire, and dating life.

It is the first known feature length film to be directed by a Black lesbian. Its post-production budget was financed by the United States National Endowment for the Arts, which set off a flurry of controversy

over its perceived explicit material, despite all of its content falling comfortably within the usual standards for an R rating. Since then, the NEA since has only been permitted to fund specific pre-approved projects.

The Watermelon Woman contains examples of: