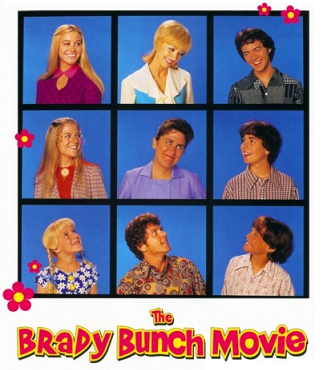 "They're back to save America from the '90s."
— Tagline
Advertisement:

The Brady Bunch never reached the top 30 during its original network run, but earned a large following in syndication. In 1995, this fame led to the release of The Brady Bunch Movie, the first of three Affectionate Parody-films of the original sitcom. The Bradys have become a bunch of Disco Dans, engaging in 1970s fads and activities despite moving to the 1990s. The film follows their efforts to raise $20,000 in order to save their home (and, by extension, their neighborhood) from a Corrupt Corporate Executive (Michael McKean) who wants to convert the area into a shopping mall.

A Very Brady Sequel followed in 1996. A man identifying himself as Carol's first husband, Roy Martin, returns from a several-decade absence, and causes friction among the Brady household. Unbeknownst to the Brady Bunch, their visitor is actually a smuggler named Trevor Thomas (Tim Matheson of Animal House and Burn Notice), seeking to steal their horse statue for Dr. Whiteman, a rich man living in Hawai'i. Trevor uses the Bradys' cluelessness to carry out his plan, as well as openly insult them throughout the film.

Paramount Television and Fox hoped to continue the success of the two theatrical films with a 2002 Made-for-TV Movie, The Brady Bunch in the White House. In it, Mike Brady becomes President of the United States.

Tropes featured in the movies: