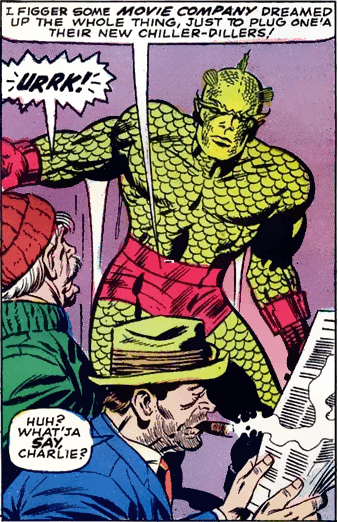 If aliens are marching into Times Square, or a garishly-costumed superhero is fighting a bad guy atop the Empire State Building, most onlookers will take the event at face value. But others, even if they live in a world where strange things are known to happen on a regular basis, will dismiss it as "some nutty Publicity Stunt," an advertising campaign, or perhaps location shooting for a science-fiction movie.

Frequently observed as an aspect of living in a Quirky Town. Occasionally, characters might intentionally invoke the trope as a way of maintaining the Masquerade, but in most cases, people don't need any "help" to dismiss the weird stuff.

Sister trope to Is This a Joke?, but in that trope, the character believes the strange events to be a joke directed specifically at her, or perhaps at a smallish group of people. The effects in Some Nutty Publicity Stunt are usually too widespread, elaborate, or large to be written off as mere pranks.

The inverse of You Just Ruined the Shot, in which actors are mistaken for the real thing. See also All Part of the Show, in which the strange events are thought to be part of some specific public performance, and Your Costume Needs Work, which is when a person thinks a particular character is wearing a costume but isn't (includes everything from monsters to celebrities).