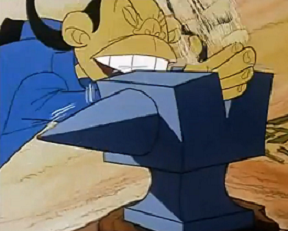 Even the anvils aren't safe.
"Pattram Sword Hand focuses on blows so precise and sharp that they turn the edge of the hand, foot, or finger into a cutting implement strong enough to part flesh, sunder armor, and cleave bone. I have seen masters of this school sever solid rock with a fingernail."
— Manual of Hands and Feet, Kill Six Billion Demons
Advertisement:

There are heroes who prefer swords. Others think Katanas Are Just Better. Then there are those who need neither. No, if they have to cut their opponent in tiny pieces they will just use their bare hands. Of course there will usually be some magic or Applied Phlebotinum behind this, but the idea is that they don't need any tool whatsoever. A swipe of their extended palm with jointed fingers, and the job is done. Alternately, the hand can be used as an unstoppable piercing weapon.

When this trope is present in western media, It's normally Hand Waved by the user knowing Karate and is also commonly Played for Laughs.

Note that an example doesn't qualify if the "hand" itself is an actual blade or spear. Examples of that should go to Blade Below the Shoulder. It must have the appearance of a normal fingered hand. Let it also be known that a Brick Break doesn't count as "cutting", since it uses blunt force and leaves a jagged edge where the pieces cracked apart.