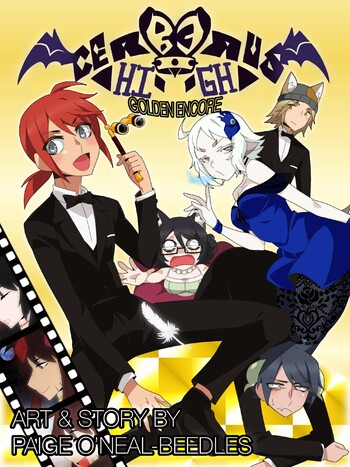 Cerberus High is a series of novels written by Paige O'Neal-Beedles, revolving around the titular boarding school for canid breeds, people with canine features.

The main series also has one spin-off novel:

General Tropes
Adaption Name Change:
Cerberus High
The series's first entry follows Kazuki Akai, a fifteen-year-old human orphan, who is transferred to Cerberus High because of an incident five years ago. Kazuki is about to give up and accept his sorry fate until he meets Sherbet Summers, a quirky tanuki that befriends him and becomes his bodyguard, guaranteeing his safety. Kazuki soon becomes hellbent on weeding out all evil that plagues the infamous school  all while trying not to lose his humanity as more and more secrets about the infamous school are revealed.
Cerberus High: Another Story
Cerberus High: Another Story is a Spin-Off novel by Paige O'Neal-Beedles, revolving around the events of an alternate Underworld separate from the one explored in the original Cerberus High novel where Casimir Bellerose's unorthodox ways lead to his archdemonship being stripped and his marriage being destroyed. But this is not his story. Instead, it's the story of his young daughter Rouge and her new life as Sapphire Lilidew.
Cerberus High II
Twenty years after the first book sees a new generation of Cerberus High students as the main characters. The most noteworthy being Kasumi Akai-Amsel, the adopted daughter of Kazuki and Axel, a bright-eyed and bushy-tailed black fox-canid who becomes excited at the prospect of leading life similar to both of her fathers at her age. This sentiment of hers becomes a horrible reality with the return of an old foe and a premonition of the world ending in where all the creatures of the shadows crawl out of the woodwork.
Advertisement:
Cerberus High 1. 5