In General
Kazuki Akai’s squad consisting of Sherbet Summers and Axel Amsel. The idea of the squad was actually thought up by Sherbet but Kazuki officially became the leader after his fight with Xiomara Amsel. 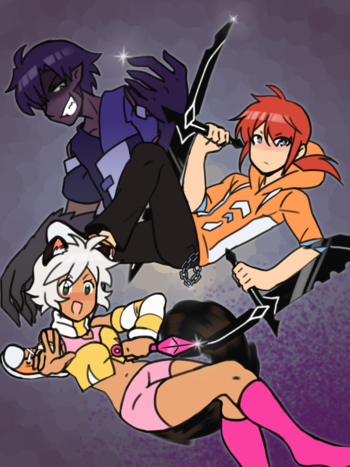 The Protagonist, a fifteen-year-old human transferred to Cerberus High due to a mysterious incident that took place five years before the beginning of the story. 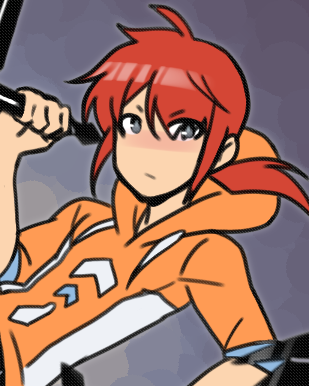 "... Shut up! I don't want to have to kill anyone else...!"
Sherbet: There wasn’t a scratch but there sure was a lot of blood. Or was it just your hair dye running?
Kazuki: Oi this color’s natural!
Sherbet Summers

The main Action Girl of the main trio. Sherbet Summers is a fifteen-year-old tanuki-canid who becomes Kazuki's first true friend upon entering Cerberus. 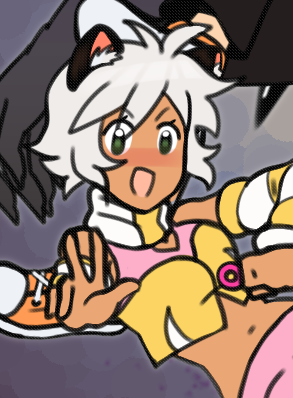 “Heck yeah it’s so. From today onwards you’re under the care of the Sherbet Summers. Got that?”
Axel Amsel

The Lancer of the main trio. Axel Amsel is a sixteen-year-old werewolf-canid who happens to be the captain of the Cerberus Cheer Squad. He is the younger brother of Xiomara Amsel.

“Little Red, Little Red… Seems like you haven’t had a real taste of what this hellhole has in store for mere humans like you.”
Axel: Forgive me for this, kay? ❤
Axel: Don’t fuck with me. Like hell would Xiomara be done in by such a lame-ass attack.
Advertisement:

In General
The Cerberus Cheer Squad is the squad founded by Axel Amsel. There are more members than just the three that are named as revealed in Chapter 7.
Mitzy & Roxy

Axel's twin dingo entourage who are both just there to constantly inflate his ego. They can be described as your typical airheaded cheerleading pair but with a frighteningly short temper.
Conrad

A minor character. Conrad is a coyote-canid who’s affiliated with Axel Amsel’s Cheer Squad, serving as his Number Two and eventual successor. 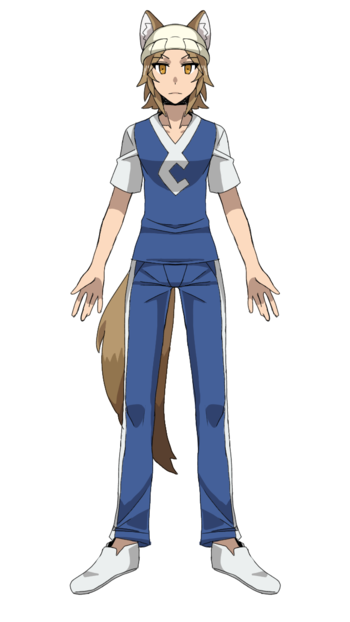 “It’s alright to hold back but sometimes you have to put your foot down if it means protecting the weak. You can’t have your biggest enemy in this battle be yourself, Kazuki. I’ve seen how much you honed your skills, but your inner demons throw all that effort out the window.”
Click here to see Conrad in his casual wear. 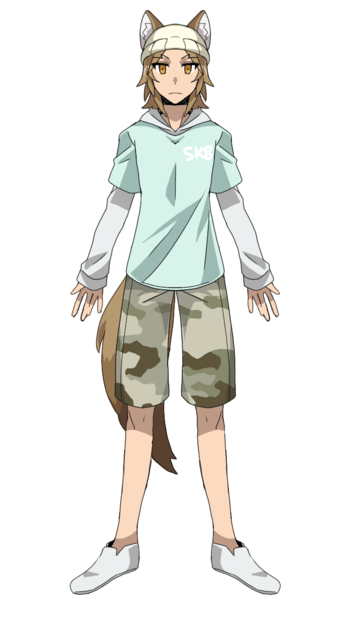 Xiomara Amsel is the Big Bad of The Brazen Youths Arc being the commander of The Brazen Youths assassination league. She is a nineteen-year-old werewolf-canid who is also the estranged elder sister of Axel Amsel. Under her reign, Cerberus High maintains its broken system and reputation. 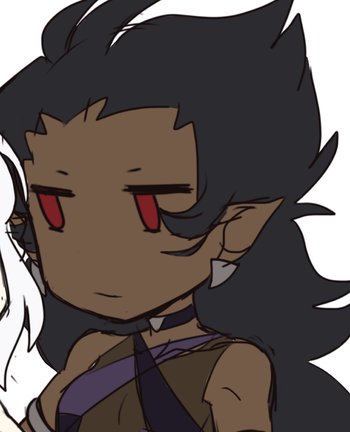 Blanc Isolde is a minor antagonist of the Brazen Youths Arc. He is a nineteen-year-old frosthound-canid who serves under Xiomara Amsel as her right-hand man and lover. 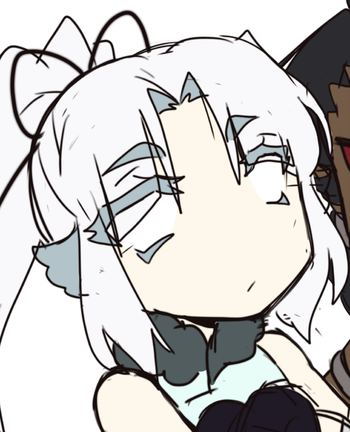 “QUIET! I WILL LET NO ONE BECOME BETWEEN ME AND XIOMARA! I MADE IT MY LIFE GOAL TO MAKE HER INTO MY WIFE ONCE SHE BECOMES HEADMASTER!!!”
Ember Hertz

Ember Hertz is a minor antagonist in the Brazen Youths Arc. She is a seventeen-year-old hellhound-canid who serves as an assassin under Xiomara Amsel’s “Brazen Youths”. 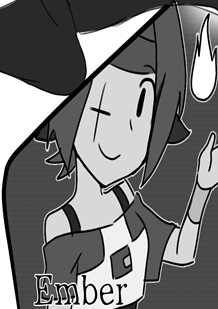 “Oralee. I will never, never let whatever is after you get to you. I swear on my life”
Elliot

Elliot is a minor antagonist featured in the Brazen Youths Arc. Elliot is a black shuck-canid who serves as an assassin under Xiomara Amsel’s The Brazen Youths. He appears to be a young adult but in actuality, Elliot is eight-years-old due to his short life span of 20 years.

Alonzo was Kazuki Akai’s caretaker until he dropped the boy off to stay at the notorious school.
Yuu Akai
Yuu Akai was the man who found Kazuki Akai in the woods right after he was begotten by Hades.
Lump

When Kazuki finally learns the truth behind his existence, his despair manifests into a being known as Shadow Kazuki who attacks him in the recesses of his mind with Rouge nowhere to help him.

Rouge is a key supporting character featured in the series Cerberus High. She is the daughter of the late archdemon Casimir Bellerose, a benevolent yet unorthodox disciple of the Underworld God Hades. 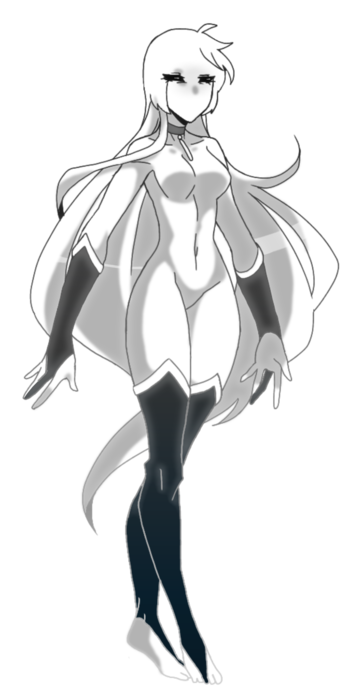 'I’ll lend you my powers only if you call out my name.'
Click here to see Blossomed Rouge.

In General
The anarchist group founded by Neo D. Fowler’s father Vincent Fowler two decades before the events of the original Cerberus High story. He sought to better The Underworld by wiping out all of Hades’s archdemons who he believes are holding him back from creating a world that's just like Elysium.
Neo Delwyn Fowler

The Big Bad of the Underworld Arc. Neo is the second-generation leader of the Visceral Purgers and the son of Vincent Fowler, the ringleader behind the slaying of the Bellerose household 15 years ago.
Akuji: Is it the same woman as before? Has the great Neo D. Fowler finally fallen for someone?
Rey

Rey is a minor antagonist of the Underworld Arc and the adopted younger brother of Kazuki Akai’s past life, Rouge. He is the Sole Survivor of the slaying of his whole adoptive family that was orchestrated by the radical anarchist Vincent Fowler 15 years before the events of the actual series.
Lita

Lita is a character featured in the Underworld Arc. She is a twenty-five-year-old demoness who serves under Neo D. Fowler as a member of the Viscera Purgers.

“Whatever your goal is you’ll never achieve it because Kazuki and his friends will be there to stop you!”
Click here to see Lita's old design

Akuji is a minor antagonist in the Underworld Arc. He is a twenty-five-year-old demon who serves under Neo Delwyn Fowler as a member of the Viscera Purgers anarchist group. He was brought into the organization from the same orphanage as Lita.
Oralee

She is a 15-year-old demoness who is the youngest member of the Viscera Purgers with her being just 2 months old when the purgers of the old generation took their own lives in a ritualistic suicide.
Vincent Fowler
Vincent Fowler is the late father of Neo D. Fowler and the first generation leader of the Viscera Purgers anarchy organization that was founded 2 decades before the events of the actual story. He sought to better The Underworld by wiping out all of Hades’s archdemons whom he believes are holding him back from creating a utopia. Near the end of his reign as head, Vincent began recruiting orphaned children to replace the old generation since he believed their purity would serve as the foundation of his new world.
Nadia Edwards
Nadia Edwards is the late mother of Neo Delwyn. Fowler and a former maid of Casimir Bellerose. She quits her job after finding out she’s pregnant with Vincent Fowler’s child Neo at the age of nineteen. 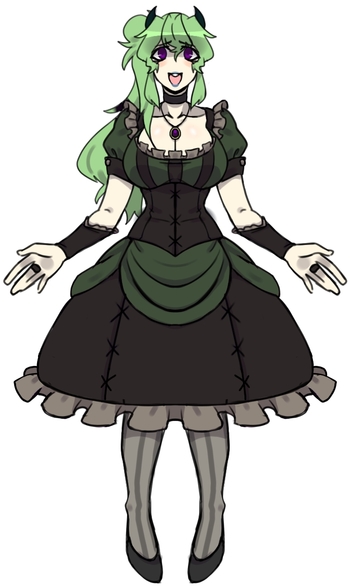 In General
Hades
Hades is the demonic god of the Underworld. He created Kazuki Akai’s body to be the human vessel to harbor Rouge’s soul when she reincarnated in the Overworld.
Casimir Bellerose
One of the seven archdemons of the Underworld God Hades. Casimir Bellerose is the late father of Kazuki Akai’s past life, Rouge, and the adoptive father of Rey.
Darcy Cadmus
Darcy Cadmus is a Posthumous Character who served as one of Hades's seven archdemons alongside Rouge’s father Casimir Bellerose. He often criticized Casimir for his unorthodox ways as he had a strong adherence to anything that tarnishes the name of Hades.