Cheer Them Up with Laughter 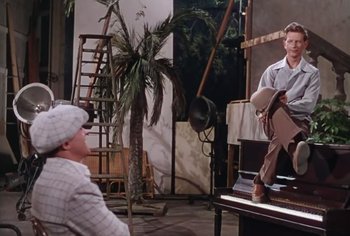 Cheering someone up when they're upset by making them laugh.

This can be achieved in a number of ways including using a Practical Joke (which sometimes involve the sad character being the victim), Self-Deprecation, pretending to be The Klutz, getting revenge on the person who made the character sad, anything really. It all depends on what the sad character finds funny. This trope may be used to prove to the audience that the characters are True Companions, Love Interests, or if the character doing the cheering is usually unkind, a Jerk with a Heart of Gold. Unfortunately, this can backfire sometimes, with the sad character viewing the cheery character as insensitive or shallow, which creates conflict.

Compare Friend to All Children (if the sad character is a child), Fun Personified, For Happiness, and The Prankster. Contrast No Sympathy, Lack of Empathy, and Quit Your Whining.

Not to be confused with Must Make Her Laugh, in which a character tries to make another character who is ALWAYS stoic/upset laugh. This trope involves people who are only upset sometimes.