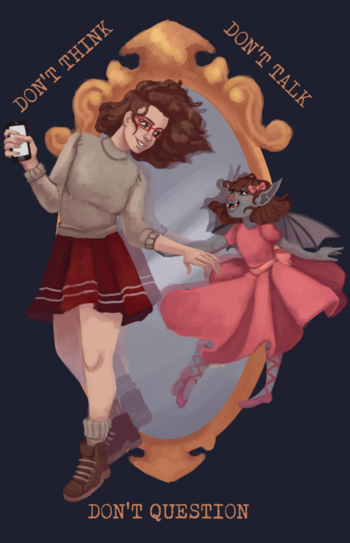 Mirrorworld is a horror-fantasy web novel written by Scraggle and the first of the Inopticus duology.

Out on an early morning walk in the city of Calgary, the arbitrary whims of Vita—a sullen young girl forced to grow up too fast because of the situation her and her father were left in thanks to the departure of her mother—lead her to a strange mirror in an alley that ends up trapping her on the other side. With no conception of what's what in this new, reflected world called Inoptica, and targeted by strange, eldritch monsters under the oversight of an all-powerful, mysterious otherworldly horror called the krylyrk, Vita ends up meeting the not-quite-human denizens of Inoptica at the guidance of an enigmatic presence on her phone simply called "Cheshire." With Cheshire's guidance leading her deeper and deeper into the mysteries of a mad world on the edge of war, Vita has to find a way home only aided by her eccentric new companions and Cheshire—and fast, for the longer she stays, the more of her humanity fades away.

. There is a prequel called Clawing at Glass.