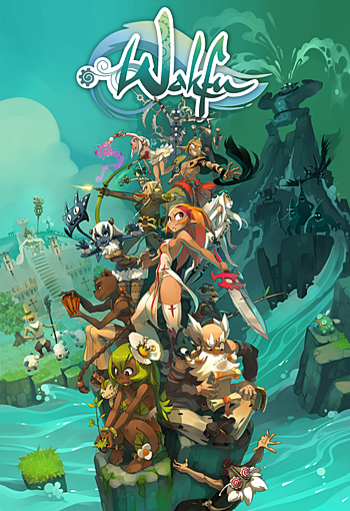 Wakfu is a 2008 French cartoon by Ankama Animationnote  Now doing business as Madlab Animations set within the world of an MMORPG of the same name, which is set 1,000 years after the production company's other MMO, Dofus. The whole show is completely kid-friendly, since the target audience is 8-10 years old, but tons of jokes are aimed directly at older audiences and fans of the game, it is full of Fanservice, and the plot itself matures enormously.

The first season follows a group of adventurers aiding The Hero, Yugo, in his search to find his true family. Together, they battle their way through various dangers, all the while being chased by Nox, a time-manipulating madman powered by the energy of all living creatures (the wakfu), which he harvests through swarms of parasitic, robotic bugs.

From a technical point of view, Wakfu is drawn with vectors using the Adobe Flash program. It is also notable that the series is animated almost entirely in France, which is rare considering the costs of such a production. Ankama's sister company in Japan is responsible for the animation not done by Ankama proper, the bonus episode "Noximilien" was animated by Madhouse, and a 52-minute feature on Ogrest was made in collaboration with Studio Ghibli.note with assistance from Madhouse

Wakfu is considered a "cross-media", consisting of the animation, the MMOG, and a trading card game. However, the animation has generated four other Spin-Offs by itself: a series of shorts called Mini-Wakfu, which supplies some useful background information on the two games (Dofus and Wakfu); a browser-based MMORPG, Wakfu: The Guardians, which uses the same engine as Dofus and allows the player to "replay" the episodes of the series through small dungeons, with characters similar in appearance and powers to Yugo; a series of graphic novels titled Wakfu Heroes; and a mix between a Beat 'em Up and Shoot 'em Up called Islands of Wakfu for the Xbox Live Arcade that acts as a Prequel for the series.

— that raised over six times the required amount. As of January 19, 2015 both seasons of the English dub are available on Netflix. Netflix also co-produced the show's third season alongside France 4. The series currently consists of 65-episodes over the course of three seasons. The first season ended on June 5th, 2010, and included a bonus 27th episode (not included in the slated 52) exploring Nox's past. Season two began airing February of 2011, and a 3 part OVA was released in 2014. A third season premiered on France 4 on September 2nd, 2017, with the finale airing September 17th, 2017. Its Netflix premiere happened on October in France, and was released for the rest of the world on April 6th, 2018.

A Season 4 has been announced

. A Kickstarter campaign for the fourth season was launched on June 9th, 2020, and managed to raise 1,522,816 Euros of the original 100,000 Euro goal for three episodes to produce a full 13 episodes plus two bonus special episodes, the first focused on Season 3's Big Bad Oropo and the second a secret character deeply connected to Season 4. It can be found here

This series and The Guardians have a Character Sheet.

Not to be confused with My Waifu, Wok Fu or Waif-Fu.

To stop Qilby destroying the world or hurting anyone else, Yugo returns him to his prison in the Blank White Void... leaving him completely alone with absolutely nothing to maintain his mind, the very things he most fears, for eternity

To stop Qilby destroying the world or hurting anyone else, Yugo returns him to his prison in the Blank White Void... leaving him completely alone with absolutely nothing to maintain his mind, the very things he most fears, for eternity