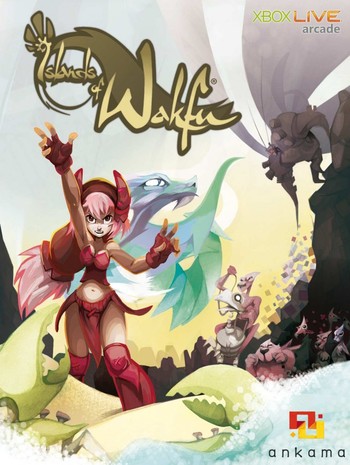 From bad krabbies, pink dog-looking pirates, and a genocidal robot, these two will have to go through hell in order to survive... That is, until the end.
"How about we start with the end of the world?"
Advertisement:

Islands of Wakfu is a Single Player and multi player game with unique mix between a Beat 'em Up and Shoot 'em Up with elements of a Puzzle Game developed by Ankama Play, and released on March 30, 2011 for Xbox 360's Xbox Live Arcade. It has 2D visuals and is played from an isometric perspective. It serves as the Prequel for the animated series of Wakfu and focuses on a young Eliatrope girl named Nora and her dragon brother and twin Efrim, who are both mentioned to be part of the Council of Six in the series.

The story takes place 10,000 years in the past of The World of Twelve, which was first claimed by the Eliatrope race. Nora and Efrim are the last initiates that must go through 3 Veils in order to complete their objective. Oh yeah, they just so happen to be going through the apocalypse as well. Now, they must survive and save what little they have out their civilization from good turned bad vicious animals, to the leader of the Mechasms, Orgonax who is hell-bent on killing all Eliatropes, along with his henchmen the Lu-Fu pirates, who set out to deprave the planet of their Wakfu by draining life and murdering other Eliatropes.

Islands of Wakfu contains examples of: