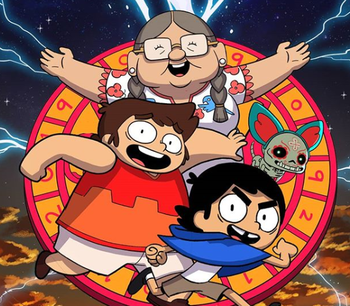 Victor and Valentino is a Cartoon Network animated series created by Diego Molano. The show follows the adventures of Mexican half-brothers, Victor and Valentino after they are sent to live with their seemingly supernatural grandmother in the strange and quirky town of Monte Macabre for the summer, finding mystical and crazy things at every turn.

The original pilot was released on November 2, 2016, as a "Cartoon Network Minisode" and can be viewed here

. The series was originally slated for a late 2018 debut but was later pushed to a March 30th, 2019 premiere in both the United States and Latin America. A second season

was announced as being in production on July 15, 2019. After a year hiatus, the third season aired in August 2021.

Victor and Valentino contains examples of: