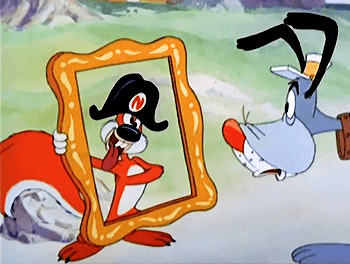 Rodents are the most common mammals on Earth, with some notable species having their own Animal Stereotypes. Rats are dirty and disgusting, mice are cute and nice, porcupines are prickly and bloodthirsty, lemmings jump off of cliffs, beavers are hard-working, and so forth.
Advertisement:

Squirrels (and their close relatives, chipmunks) are, however, mostly seen as hyperactive animals who either love to play pranks and mess around with people, are just off-the-walls crazy, or—in extreme cases— downright sadists. They will run around stealing nuts from people — and then drop these nuts on people's heads, driving them nuts. They also have the bad habit of crawling into people's clothing, and are among the arch-enemies of dogs, often because the dogs are fed up with their antics. The fact that they have a reputation for breaking into bird feeders and eating the seed inside doesn't help either.

Bonus points if they have very short attention spans, too, even in a Sadistic way. Truly evil squirrels are rare in fiction, but they are consistently depicted as troublemakers whose antics are annoying at best and infuriating at worst. Basically, they're seen as the trolls of the animal kingdom, causing chaos for its own sake and existing only to annoy others.

It's easy to see why these furry critters have such traits associated with them: squirrels and chipmunks are very jittery, skittish animals in real life, moving about in short, twitching movements and taking off to the nearest tree at the slightest sign of danger. Their signature chattering gives the impression of manic cackling, as if they just pulled another prank on some hapless bloke, and they tend to cache food before completely forgetting about it, which fuels the "short attention span" stereotype.

If the squirrel in question is a giant squirrel, prepare to be very afraid.

Note: Just because a character is a squirrel or chipmunk, it does not mean they automatically qualify for this trope. The example also needs to describe how the character is a troublemaker, a cloudcuckoolander and/or a sadist.

Subtrope of Animal Stereotypes. Compare Rascally Rabbit, another small, furry animal that's often a trickster and prankster, but tends to be shown in a more positive light. For other animals often seen as tricksters, see Rascally Raccoon and Mischief-Making Monkey. The Trope Namer is the Tex Avery cartoon Screwball Squirrel (1944). The trope formerly known as "Screwy Squirrel", about crazy, malicious prankster characters that are usually not squirrels, is now split between The Gadfly, Troll, The Prankster and Cloudcuckoolander.