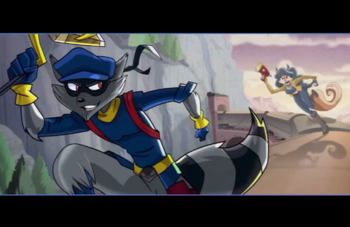 Even foxes aren't cunning enough for him.
Rocket Raccoon: Question: What if I see something that I wanna take and it belongs to someone else?
Corpsman Dey: You will be arrested.
Rocket Raccoon: But what if I want it more than the person who has it?
— Guardians of the Galaxy
Advertisement:

Raccoons' cute masked faces have led to countless fictional depictions as sly, thieving (though usually cute and cuddly) tricksters. Due to Added Alliterative Appeal, most fictional raccoons are usually described as "rascals" (this word was used so often, it even became their Stock Animal Name!). Usually Rascally Raccoons are depicted as just playful, mischievous, maybe a bit disobedient — though portrayal as literal thieves or kleptomaniacs isn't rare, either. Furthermore, unlike other predators like foxes, raccoons are often depicted as streetwise, even while being willing to use their cute looks for their advantage, considering they are notorious as one of the largest mammals who prefer living in cities.

A subtrope of Animal Stereotypes. Compare Cunning Like a Fox. For the Japanese raccoon dog that tends to get a similar treatment in fiction, see Tanuki. In some Western localizations, the Tanuki may be mistaken for a Rascally Raccoon. See Rascally Rabbit, Sneaky Spider, and Those Wily Coyotes for other animals typically used as a "trickster" in fiction, and Screwball Squirrel and Mischief-Making Monkey for animals stereotyped as troublemakers.