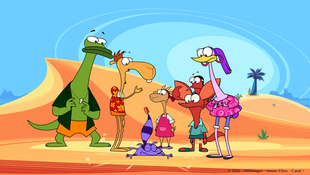 Trust Me, I'm a Genie is a French cartoon from 2011. It follows the adventures of Diego, a camel, who is the master of Ziggy, a raccoon genie, and all their desert friends. Ziggy granted Diego's first wish, a cafe, and his second wish was a swimming pool for all his friends to enjoy. But then, Ziggy got sand in his magic can, so in turn, his third wish became defective.

Tropes you'll find the the series: