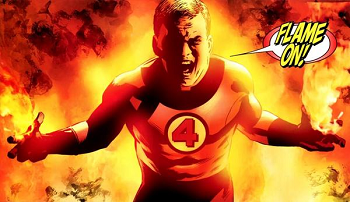 You don't activate your superpower without an announcement. After all, randomly bursting into flames at a dinner party would be rather rude of you, if you were the Human Torch.

So you put together a ritual that triggers things, complete with a Catchphrase. You shout "Flame On!" and the other dinner guests — or anyway, the audience — knows things are about to get flame-y.

In short, you (the writer) invoke your character's power to suspend disbelief long enough to do something way out of the norm. It can be an incantation or By the Power of Grayskull!. More often than not, though, it's just the Rule of Cool in action, rather than an actual incantation.

The Pstandard Psychic Pstance gesture seems to be a universal invocation of psychic powers. Contrast with In the Name of the Moon and Transformation Name Announcement, which come after the transformation, but before the buttkicking. Brother of Calling Your Attacks. Not to be confused with Magical Incantation, By the Power of Grayskull! or Words Can Break My Bones where the words actually do something. May overlap with the Survival Mantra or the Badass Creed.

Not to be confused with the act of invoking a trope.