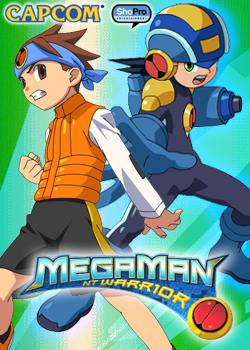 MegaMan NT Warrior is the anime and manga adaptation of the Mega Man Battle Network series (Battle Network Rockman.EXE in Japan, and later just Rockman.EXE). Specifically, it's Viz Media's Western title for the anime and manga, referred to as Rockman.EXE in Japan. The manga had 16 volumes and the anime had 5 series (Rockman.EXE, Axess, Stream, Beast, and Beast+) along with a movie, though only EXE and Axess got an official English release. Despite all being under the same label and sharing the same basic concept, both the anime and the manga are separate entities from each other and the original Game Boy Advance games.

The chief concept is the series' famous For Want of a Nail: In the classic verse, Drs. Light and Wily saw incredible advances in the field of robotics, though Wily's jealousy at Light's more immediate success with the general public saw his arguably greater intellect twisted to petty theft and then increasingly devastating assaults on the world itself. In the Battle Network verse, however, Dr. Light (here named Hikari Tadashi),note A pun on the Japanese-English L/R confusion in romanisation — the name translates out to Right Light turned his mind to the world of computer networking and carried the population of the world with him anyway, leaving Wily, who was left with his robotics to stew in misery. In the present, or rather, the far, far future of 20XX, the world has seen mind-boggling advances of technology, each and every bit of it connected through the vast cybernetic sea of the internet. Everything — cars, refrigerators, schools, the weather, you name it — everything is literally online.

This has gotten to the point where the internet has become its own dimension. In order to easily navigate this massive dimension, humans created a series of Artificial Intelligences, roughly human in form, called Network Navigators, more commonly known as "Net Navis" or just "Navis". Net Navis each have their own personalities and assist humans with the normal internet stuff: shopping, web surfing, interacting with friends, searching for information, defeating the wild viruses roaming around with their built-in weapon or BattleChips, illegal Net Battles between Navis...

However, nothing is ever ideal. The internet is under almost constant threat from a number of villainous entities, most notably the WWW (pronounced "World Three"). The Grandson of Dr. Light, 10-year-old Lan (Netto) Hikari and his partner, MegaMan.EXE (Rockman), find themselves dealing with everyday life and taking down said villainous entities that threaten to destroy the Net and the world along with it. They won't just be fighting online; when malevolent entities strike, the machine system connected to that part of the hardware will often malfunction dangerously which means Lan will have to take as much initiative offline to stop threats as MegaMan does in Net Battles. For example, Lan's and MegaMan's introduction to the world of crimefighting has the pair take down an arsonist who set housefires using electronic ovens.

However, following that moment, the various adaptations diverge wildly.

This Work Contain Examples of:

Ms. Madd kicks a public phone out of anger.

Ms. Madd kicks a public phone out of anger.