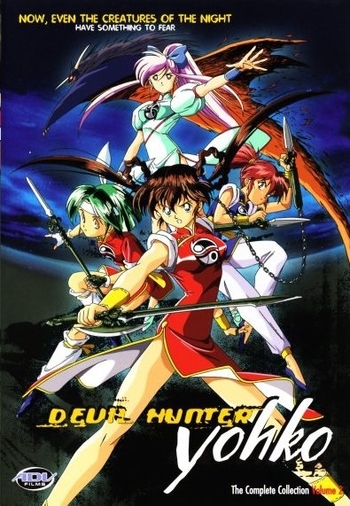 Devil Hunter Yohko (Mamono Hunter Yohko) is an anime OVA produced by Madhouse and released in six episodes from 1990 to 1995. It follows the life of a boy-crazy sixteen-year-old schoolgirl named Yohko Mano... who also happens to banish demons from the Earth as a Magical Girl Warrior in her spare time.

For centuries, the Mano family has worked as a tribe of demon slayers. Yohko's grandmother, Madoka, served as the 107th Devil Hunter; Yohko's mother, Sayoko, would have become the 108th, but a Devil Hunter must remain a virgin until she comes of age to take on the responsibility. Sayoko's pregnancy meant the Devil Hunter lineage would continue with Yohko, who sits on the cusp of her fated birthday and still has her virginity. With only days before gaining the power of the Devil Hunters, Yohko could follow in her mother's footsteps — and the demons infiltrating her school would love to help her break the lineage once again...

ADV Films released all five episodes of the series (and a music video special) in the United States; the first OVA doubled as ADV's very first anime release. The OVA soon became a Gateway Series for numerous anime fans of the early 1990s; since it ended up more successful in the States than in Japan, the producers made the last Yohko episode with the foreign market in mind. Eventually, an English dub was released in 1996.

Do not confuse this series with Demon Fighter Kocho, a similar tale which takes place at Heian University.