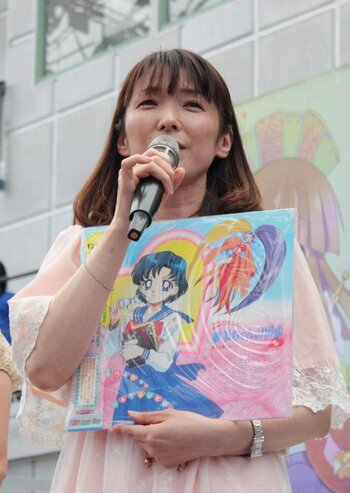 *gulp* O... okay... Aya Hisakawa (born November 12, 1968) is a prolific seiyuu from Osaka (not THAT) who has been active in the business for over 20 years. During that time, she has played nearly every character type imaginable, from Genki Girls (like Skuld or Chai Xianghua) to eggheads (like Ami) to an Empress to, as her voice has matured with age, sexy or mature women (like Unohana). She's even done Crossdressing Voices on three occasions. And yes, she sometimes has roles where she speaks Kansai dialect.

Mrs. Hisakawa is also an accomplished singer who has performed a number of theme or insert songs, almost always in series where she's voicing a character. She was in the "Goddess Family Club" singing trio with her fellow seiyuu Kikuko Inoue and Yumi Touma. She's also been a Relationship Voice Actor with Yukana, both having starred in three (technically four if you count 1 character-of-the-week role) anime.

"Ahhh, the Forces of Nature are here to vandalize my page again! Pit, you have to stop them! ...Pit? Fine, I'll do it myself."
"Power of Maelstrom!"
"Now douse yourselves in water, and repent!"
"You don't want me to call my husband Vegeta, he's a Super Saiyan after all!"