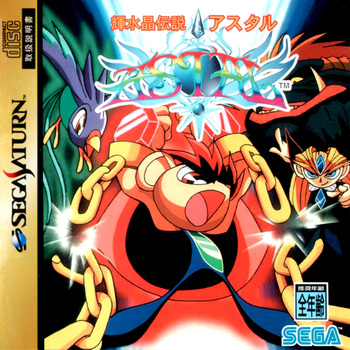 The epic struggle of a young boy to redeem his sin and save the young world which he lives on, and the life of the only person he has ever loved.
Advertisement:

Astal is a video game released for the Sega Saturn in 1995 as an in-house production by Sega to showcase the Saturn's 2D capabilities. It takes place in a very colorful crystal world called Quartilia, which was created by the goddess Antowas.

To inhabit Quartilia, Antowas created two humanoids: from a green crystal she made Leda, a girl who can give life to things on Quartilia; and from a red crystal she made Astal, a boy whose purpose is to protect Leda. Happy with what she has created, and exhausted from the endeavor, Antowas goes to sleep.

While Antowas is asleep, however, an evil god named Jerado decides to take over Quartilia by making a warrior, Geist, to kidnap Leda. Astal, who is not amused by this, ends up cracking the bottom of the ocean while trying to save Leda. Leda is safe, but the commotion wakes up Antowas and causes her to banish Astal to one of Quartilia's moons. Oh, crap...

Leda takes pity on Astal and gives him her jewel before he gets sent to the moon. Antowas then presumably visits the underworld, confronts Jerado and defeats him and cripples his army of monsters by destroying his physical form. This effort tires her again, and she embarks on a second great slumber. While on the moon, Astal witnesses Leda being kidnapped by Geist again, and ends up leaving the moon to pursue Leda. In Jerado's abscence, Quartilia has been molded into a ravaged hellscape, broken by his monsters, now stronger than ever. Astal takes it upon himself to defeat every creature, confront Geist and his master, and defeat them. Oh, and he also ends up rescuing and meeting a bird that for some reason just won't leave him alone...

TMS Entertainment animated the cutscenes in this game.