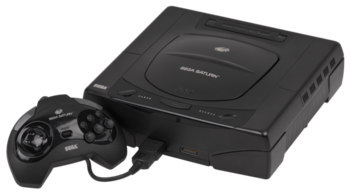 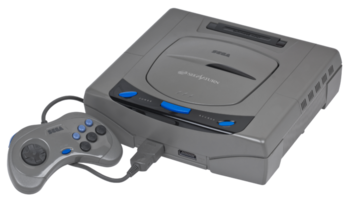 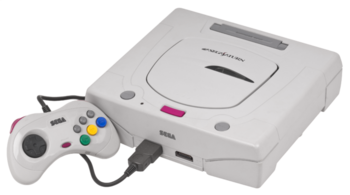 Launched on November 22, 1994, the Saturn was Sega's entry into the fifth console generation. It wound up becoming a Creator Killer, although the company wouldn't succumb to its illness until 2001.

It was originally intended to be a 2D gaming platform which would surpass Sega's competitors. The industry was getting jazzed about polygonal graphics, and Sega realized their next console should include just that. After all, it was Sega's own arcade fighter Virtua Fighter which set the standard. The problem is that the original Saturn model was barely better than the failed 32X in that regard—or the rumored capabilities of the then-upcoming PlayStation and Nintendo 64, for that matter. Nintendo and Sony would have left the Saturn eating dirt.

Once the U.S. ads (finally) started promoting it as a gaming system, one of them boasted about how the Saturn had two 32-bit processors while the PlayStation only had one. The irony is that those "two 32-bit processors" made the system far more difficult to develop for and played a major role in third-party companies favoring the PS1. Instead of redesigning the console to make it powerful enough to handle 3D, Sega just slapped on a duplicate CPU and graphics card. Not as dumb as it sounds, because CPUs with multiple cores are the norm in video game consoles and PCs today; multiple CPUs were nothing new to veteran arcade developers like Sega, who adapted the Saturn hardware into their Titan Video (ST-V) arcade board. Back in '95, however, having entirely separate units just jacked-up the cost and the complexity of developing for the console. It was literally just individual processors with very little cross-talk between them.

The graphics card itself had technical issues that prevented developers from exploiting its full processing power. Unlike virtually every other 3D console (aside from the 3DO) or computer ever made, the Saturn used quadrilateral (rectangular) shapes in its 3D rendering rather than the more traditional triangles. While this had some notable advantages such as reduced texture warping and better representation of round objects, quadrilaterals were nothing short of nightmarish for developers to work with. Moreover, it made it impossible to directly port over games from the PS1 and N64. In theory, the Saturn should have topped the PS1 in terms of 3D graphics, but poor understanding on how to program graphics on a system with multiple processors led to most Saturn ports not looking as good as the originals. Games like Sonic R (released late in the console's lifespan) and the cancelled

◊ Virtua Fighter 3 port showed that the Saturn could do 3D very well in the right hands and with the right programmer tricks. 2D games were a different story, since the console was specifically built with 2D in mind.

As typical for Sega, the console suffered from miscommunication between Sega of Japan and Sega of America. Japan developed the Saturn without even telling the U.S., so Sega of America launched the 32X, lured a bunch of suckers onto that bandwagon, took their money, and then abandoned the add-on (and slashed its price 90%) once the Saturn announcement dropped. Americans weren't amused, and most consumers opted to skip the Saturn and later the Sega Dreamcast. Also, Sega of America's greater acclaim with the Mega Drive/Genesis sowed resentment over in the Japanese offices: set on proving that they could do better, they refused to accept any help or ideas from their American counterparts on improving the Saturn design, and occasionally outright sabotaged their efforts since Sega of Japan wanted sole credit if the Saturn was successful at home. One of Sega's initial plans for their next-gen system involved a 3D graphics chip designed by Silicon Graphics. However, this deal was crafted by Sega of America, so it was quickly shot down when they presented it to Sega of Japan, which pissed off SG since they had sunk considerable resources into the design. When they asked Sega of America CEO Tom Kalinske what they should do, a bewildered Tom suggested they take it to another games company, which they did: their chip became the basis for the N64. Both consoles ended up losing ground to the PlayStation, but the N64 moved a lot more product than the Saturn.

Japan's silly ploy worked, at least domestically: the Saturn sold better in Japan than in the U.S., but it still lagged behind the PS1 and bombed in all other markets that Sega had previously dominated—including North America, which was the beginning of the end for Sega as a hardware manufacturer. By the time Sega mended bridges with their U.S. affiliates, it was too late as their reputation in the west had been trashed almost beyond repair, as had their relationships with most developers and store chains. Most of the people who drove the Mega Drive sales in the west were gone, and Sega of America had become a shell of its former self.

Another black eye for the console was the lack of a Killer App, namely a new Sonic platform game which wasn't a crummy spinoff. Sega did (eventually) release the mediocre Sonic 3D Blast...which was a port of an earlier Mega Drive title, in addition to the Mario Kart wannabe Sonic R and a compilation of Sonic 1, 2, and S3&K (along with some extra content) called Sonic Jam. Sonic was another victim of the inscrutable Japanese: Sonic Team over in Japan overheard that their California-based branch were developing a new Sonic title ("Sonic X-treme") using the same engine that their boss, Yuji Naka, built for NiGHTS into Dreams.... Naka was livid and told Sega in no uncertain terms to scrap the project, which forced the Americans to make a new engine from scratch; predictably, they were not able to do so in the allotted time and the game became vaporware. Nowadays, a developer would be crazy not to use a pre-existing engine if it fit their needs due the rising costs of game development; indeed, the modern Sonic games do exactly that, whether it be repurposing their own Rush engine or Wreaking Havok with Sonic Unleashed (and Sonic '06, cough...). But all of the behind-the-scenes stories about Naka paint him as an ambitious man who alienated the other creative minds at Sega. This video series

covers the X-treme comedy in detail.

While Bernie Stolar (see below) is still-loathed for shafting western gamers out of the Japan-only Saturn games, the Saturn was already losing the U.S. market, and most of the games he denied official releases to were niche genres such as shmups and dating sims. Stolar's predecessor Tom Kalinske, who brought Sega out of the dark ages, already set the Saturn's death in motion by rushing its release to get a lead on Sony's upcoming console. He knew the Saturn was a failed successor to the Mega Drive, even if Sega of Japan did not. He tried multiple times to cancel it. Then he tried to delay it so that Sega could build a software advantage over Sony and stay on top. Tom knew what he was selling was bad—but he had handed in his notice by then, so he wouldn't be around to suffer the consequences of dropping a lemon onto the public. Developers were told about the surprise release at the same time as consumers, leaving almost nothing (at least, nothing that wasn't similarly-rushed) to demo until the console lauched four months later. Many important retailers were caught with their pants down: they had to scrape by with limited supplies to advertise and sell for months, a time gap which Sony took ample advantage of. KB Toys were so inconvenienced that they dropped the Sega Saturn from their catalogue altogether. Of course a lot of loyal developers were screwed out of money, as they had until the target date "Saturnday" (September 9) to get a piece of the launch day sales hike.

The backlash was multi-pronged and immediate: At the conference where Sega announced the early release and launch price, the Sony rep who took the stage had the plum task of explaining that the Saturn would cost a hundred dollars more ($399) than the PlayStation, and the crowd turned on Sega at once. Not helping matters was Tom's famously brash public persona, which everyone in the industry had grown weary of, nor the fact that he blew off an exclusivity agreement for FIFA 96, which would have at least kept a major license out of Sony's and Nintendo's hands for a year.

From a damage control standpoint, Sega of America couldn't have made a worse decision than hiring Bernie Stolar, a former Sony Computer Entertainment America executive, to replace the outgoing Tom as CEO. Stolar unveiled a "Five-Star Game" policy in '97 which drove away nearly all of the American third-party developers, barred several high-quality games from being released in the west due to his 'no 2D' stance (again hobbling the Saturn since its 2D library was miles ahead of its 3D games in terms of presentation), declared the Saturn dead in the water due to its admittedly poor design, and rushed the release of the Dreamcast—basically giving the finger to Saturn's small-but-sizable fanbase. Stolar ensured that nearly all of the games that showed off the Saturn's superior 2D capabilities never left Japan, unless they were either a Capcom fighter or Neo Geo port. In a few short months, he also managed to crater Sega's reputation for being friendlier to third-party developers than Nintendo. The final insult: Stolar vetoed the development of any Role Playing Games on the console just as Final Fantasy VII kicked off the JRPG craze in the west, while giving a free pass to sports titles—a genre which was waning at the time and had very limited appeal outside of the US. The former is said to be one of the main reasons the Saturn failed.

All told, Sega lost about $270 million on the Saturn, and it only sold 11 million units worldwide. It did better in Japan, mostly thanks to the great Segata Sanshiro, a judo master on TV who beat the living crap of everyone who didn't play a Sega Saturn. The Saturn has a considerable library in Japan, where it was the favorite console for shoujo games and Visual Novel ports, in part because Sega was more permissive than Sony or Nintendo about releasing 18+ games with nudity.

Too bad Sega didn't see the point of localizing said games or porting any of its U.S. titles to the Dreamcast, although the Saturn's complex architecture would have made that easier said than done. Furthermore, due to the general disarray of Sega at the time, the source codes for many of those games (most notably Panzer Dragoon Saga) have been lost. And the games themselves usually don't come cheap on eBay. They would later find homes on the Nintendo DS, PlayStation Network, Xbox Live Arcade, Virtual Console and PC.

As can be seen, the system was really processor-heavy. Not a good thing in that day, when developers were just starting to grasp 3D graphics.