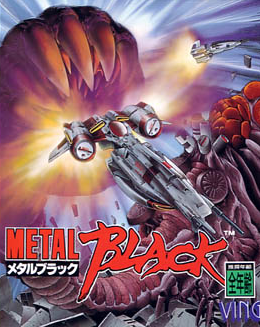 Metal Black is an arcade Shoot 'Em Up released by Taito in 1991. It's designed and produced by Takatsuna Senba of Gun Frontier and referred to as Project Gun Frontier 2, although the relation to that game is tenuous at best.
Advertisement:

Your ship is able to collect many small power-ups to build its weapon's power. Players could then unleash a large beam attack or a screen-filling energy burst that would drain their power level back to zero.

Relevant games include: Border Down, the Spiritual Successor to Metal Black, later installments in the Darius series (especially G-Darius, which features a similar final boss and ending, and focuses on the beam duel mechanics) and Gaia Seed

which shares some themes and mechanics.

In 2016, a Metal Black DLC was added to Dariusburst Chronicle Saviors. It features the return of the Black Fly spaceship with simplified and more user-friendly gameplay mechanics, and a level set inspired by the game.

The year is 2042: Earth gets invaded by aliens intending to plunder Earth for inorganic materials. Both the aliens and the area of space they came from became known as "Nemesis". Earth's troops put up a fight, but were outmatched by the alien's powerful beam weapons. However, Earth's scientists managed to obtain the aliens' weaponry for Project Metal Black, which focused on developing at least 20000 human spacecraft with the same beam weaponry. The spacecraft was known as the CF-345 Black Fly.

Ten years after the invasion, Earth unconditionally surrendered to the aliens and promised to keep all of Earth's remaining forces from attacking. This applied to Project Metal Black as well and sealed the Black Fly spacecraft from the people. The aliens ended up devastating Earth anyway via draining its natural resources, and the dying planet's capacity to sustain its population was rapidly diminishing... it was only a matter of time until someone discovered legacies of Project Metal Black and struck back.