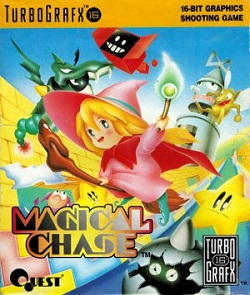 Magical Chase is a very obscure Cute 'em Up that once graced The 16-bit Era of Console Video Games in 1991 developed by Palsoft for TurboGrafx-16 and published by Quest. The game is a horizontal shooter in the veins of the Gradius series and Cotton: Fantasic Night Dreams, but has some unique gameplay elements of its own to make stand out from other shooters. Unlike most shooters, your protagonist isn't a One-Hit-Point Wonder as she has a Life Meter to withstand against some attacks.
Advertisement:

The story is centered around a Cute Witch named Ripple who's now afraid of her teacher for breaking a promise with her by accidentally releasing six devils sealed in a forbidden book. If Ripple doesn't fix this problem soon, her teacher will turn her into a frog as her punishment. With the help of two Elf-Stars, Topsy and Turvy, she sets out to seal the devils from whence they came before she spends the rest of years on a lilipad.

The game consist of six stages (three if you play it on "Easy"), and players can collect crystals to earn gold and points, which can be spent to buy up power-ups and recovery items at certain parts of the stage.

Due to it's obscurity, the game has become something of a very rare gem among shoot 'em ups, fetching very high prices in auctions. The game has also seen an overseas release 1993, as well as a handheld port on the Game Boy Color and a port on Windows 95 in Japan, but since then, not much else.

See also Trouble Witches, which is more-or-less a doujin successor to this game. More about this game can be found on That Other Wiki