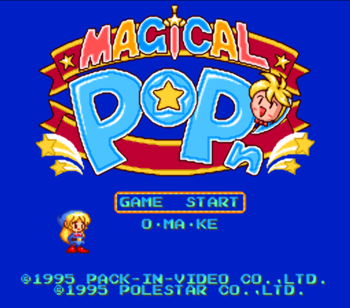 A little Princess' quest for a magic jewel.
Advertisement:

Magical Pop'n is a Super Famicom platform game developed by Polestar and published by Pack-In-Video in Japan in 1995.

The game tells the story of "Princess", an energetic little girl who lives in the peaceful kingdom of To'ahl with her mentor and caretaker, Gramps. One day, Gramps was lecturing Princess on the rules of magic in the kingdom when suddenly the Crystal Ball glows and floats off the table. Gramps views this mysterious event as a bad omen, but Princess is too busy enjoying the pretty shiny ball to notice.

Just that night, an army led by "The Demon King" invades To'ahl and steals the Magic Jewel, so the Demon King can rule the world with it's power. Princess jumps into action, dons a little pink sword and gives chase to get the magic jewel back from the Demon King.

Magical Pop'n is a standard 2D platformer. You take control of Princess as she runs, jumps, slashes enemies with her sword, and uses magic. She starts out with a standard laser beam spell, but as the adventure continues, she gains new magic abilities, like a Grappling hook, Ice Spells, and even a speedy wall-climbing rolling ability. Pressing the Select button lets Princess do a Limit Break version of her current power, destroying every unfortunate thing on the screen, with the cost of few extra stars in her inventory.

Princess starts out with a tiny Life Meter with three hearts, but grows if she finds the ever-useful Heart Containers that litter the stages, but as the game is run on linear progression, there's no way to backtrack, so make sure you find them in the stage they're in, or they're lost for the rest of the game.

As the game was released near the end of the Super Nintendo's lifespannote  In America. Not so much in Japan, where the SNES lasted as late as 1998., it unfortunately never got a release outside of Japan, but good folks have translated the game and some reproductions carts have been made.

This Poppin Adventure contains examples of: