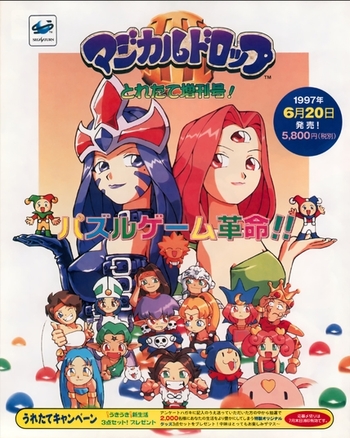 Like a certain other wildly-popular puzzle game, Magical Drop has roots in Russia: Data East employees came across a compilation of small-scale Russian computer games and noticed a puzzle game by the name of Drop-Drop. Drop-Drop is a simple affair where columns of tiles descend from the ceiling of the playfield, and players attempt to clear the field by grabbing and tossing individual tiles until several with the same picture are lined up vertically. Seeing potential in this obscure DOS game, Data East obtained a license and put their own spin on the title to create their entry into the competitive puzzle subgenre kickstarted by Puyo Puyo Tsu. Instead of as many as seven different unique pieces, there are four color balloons and "special" field-clearing balloons that correspond to each color. Instead of Drop-Drop's minimalist aesthetic, the game is drenched in Tarot Motifs, with a cutesy cast similar to Puyo Puyo's wacky stable of dungeon crawler characters. Instead of solo play, the game is a battle against the CPU or another player.

Part of makes the gameplay of Magical Drop stand out is its heavy focus on reflexes and continuous action, as opposed to Puyo Puyo and similar games that focus on the construction of a large chain and then doing nothing but watching once it is set off. While it is possible to build similar chains in Magical Drop, exploiting the fact that vertically matching three balloons of one color takes any horizontally-matching balloons with them, it is far from the most optimal way to play. Instead, players are intended to take advantage of the fact that they are free to grab and drop balloons while other balloons are disappearing to create chains on the fly. At the highest levels, be it the CPU or another player, stopping for any significant amount of time is a recipe for disaster.

The characters are not just aesthetic dressing in Magical Drop either; there are subtle changes to the way that the game plays depending on the character, from the special balloons at their disposal to the balloons that they drop into their opponent's field to even the "damage" formula in later games. But speaking of aesthetics, the first two games' respective final bosses are attractive ladies that tend to be what many people remember about the games.

Compare Money Puzzle Exchanger, a Neo Geo game that is Magical Drop WITH COINS AND MAGICAL GIRLS. So much so that Data East actually took its developer to court.

No relation to Magical Doropie.