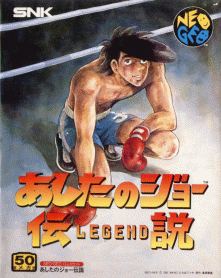 Legend of Success Joe (Ashita no Joe Densetsu) is a pseudo-Beat 'em Up boxing game released by WAVE Corporation in 1991 for the Neo Geo.

The game's story, based on the popular manga Tomorrow's Joe, follows the career of Joe Yabuki from his years at the Toko Special Boys' Reformatory, his bantamweight qualifying bout against Shohei Inagaki, his fight against Wolf Kanagushi, accidentally killing his rival Toru Rikiishi in the ring, provoking a ruffian, and making his comeback to world champion by fighting more opponents both inside and outside the ring.

The game's text is entirely in English (there are a few Japanese voice clips), though it was never released outside Japan. Those who know the game even by reputation may be able to guess why.