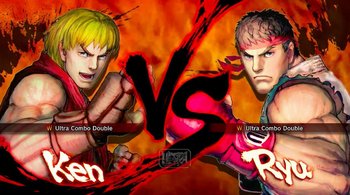 Get ready for the next battle!
Advertisement:

A visual trope that usually only appears on a single panel or frame before an actual fight starts. It will features characters on two or more sides in static positions that can easily be reused for future splashes. They will be profile shots, usually of the upper body but sometimes showing the entire body instead.

Somewhere on this splash will be the word "vs." or "versus." Sometimes "and" will be used to indicate team-ups. While these are secondary to the actual image, the presence of these small words is still a hallmark of the trope. Sometimes, a voice will announce the confrontation as well, and if so, expect the announcer to be a Large Ham.

While serviceable and almost unnoticeable on its own (except on computers where elaborate splash screens may aggravate already lengthy stage loading times), this trope makes for great parody fodder and self-one-upsmanship in that viewers are trained to expect awesome fight scenes whenever they see one. Thus, overusing this trope can easily crank up the viewer's excitement in a short period of time.

A stock Battle Intro. Compare Juxtaposed Halves Shot (where half of two characters sides/faces are juxtaposed to or beside each other), Mirrored Confrontation Shot (a similar but conflict exclusive trope), and Super Move Portrait Attack.

The versus screen for Mortal Kombat: Armageddon features portraits of the two chosen characters getting ready to engage in battle.

The versus screen for Mortal Kombat: Armageddon features portraits of the two chosen characters getting ready to engage in battle.