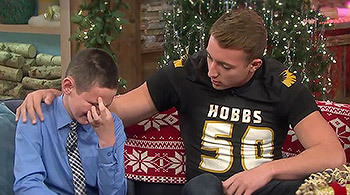 "It's gonna be okay, man. Just tell me who they were...so I can go beat the crap out of them."
Advertisement:

The Jerk Jock's answer to the Lovable Alpha Bitch. It is typical in most high school settings to have the jock as the bad guy but this trope is a method of portraying jocks in a positive light. After all, people don't automatically turn into sociopaths the moment they join a sports team.

The Lovable Jock differs from the Lovable Alpha Bitch in that while the Alpha Bitch can still be a bully to everyone except the main character to count, the Lovable Jock will be a Nice Guy by default. Though sometimes connected to one, he is rarely the main man of the high school and will usually be in contrast to an actual Jerk Jock. If the Jerk Jock is blond, the Lovable Jock may be brunet(te) or redheaded, though blond(e) Lovable Jocks are common too. But that isn't a license to try anything funny on him or anyone he cares about; remember, being a jock means lots of exercise and quite often a lot of muscle. If anyone dares to try Bullying a Dragon or attacking his Protectorate, he will wipe the grass with them.

In many a sports setting, a Lovable Jock is The Hero (and The Leader if he has a team) of these stories by default. If not, expect him to be The Lancer or even a friendly sidekick. Both the Lovable Jock and his team will also be countered by an Opposing Sports Team in some scenarios. A Face in Professional Wrestling is usually this, although he's not immune to using harder methods as aforementioned if someone messes him off.

A variation can come where the Jock is merely too stupid to be genuinely spiteful, in which case compare Kindhearted Simpleton. At other points, the Jock is a Genius Bruiser and Academic Athlete, and gets on with nerds and other sorts because he's capable of holding a conversation with them, and may himself be geeky about the sport he plays. Doubly so if the sport he plays is Baseball, in which case see Game of Nerds.

Female cheerleaders or athletes who are not the Alpha Bitch can go here instead of Lovable Alpha Bitch since that trope is reserved for the actual Alpha Bitches. Speaking of female characters, a Lesbian Jock can be an example too. The Jock need not be on the football team, but on any other sports team in any setting. Both are Truth in Television.

Compare and often overlaps with The Quarterback, Big Man on Campus, and Gentle Giant.