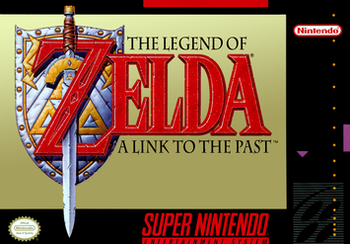 May the way of the Hero lead to the Triforce.
"The Hero's triumph on Cataclysm's Eve wins three Symbols of Virtue.
The Master Sword he will then retrieve, keeping the knights' line true."
Advertisement:

The story begins with Link receiving a psychic message from Princess Zelda, telling him to come and save her from her imprisonment in Hyrule Castle. Link's Uncle also receives the call but dies, so Link must take up the call. He discovers that the evil wizard Agahnim is capturing girls from across Hyrule, and learns that the only way to defeat him is to obtain the three Pendants of Virtue from dungeons across Hyrule, and then collect the Master Sword. Of course, saving the world isn't that easy... Link is eventually forced to travel to the Dark World, a parallel version of Hyrule distorted by Ganon's wishes after he was sealed in the Golden Land (that story would later be told in Ocarina of Time), to save the captured maidens and the Princess, and finally defeat Ganon. The basic plot formula of A Link to the Past (gather three items, get Master Sword, huge plot twist, gather more items, fight the final boss), known to some fans as "The Legend," would be repeated many times throughout the series.

The game would receive a sequel in 1993 in the shape of Link's Awakening for the Game Boy. Link to the Past was re-released in 2002 on the Game Boy Advance, sharing a cartridge with the multiplayer-only Four Swords. A sequel for Nintendo 3DS, A Link Between Worlds, was released in 2013. It has the general look and feel of the original except with 3D graphics (though still top-down) and features the same version of Hyrule with completely new dungeons.

During a randomized Legend of Zelda: A Link to the Past speedrun, Vinny gets something incredibly disappointing in place of the Magic Mirror.

During a randomized Legend of Zelda: A Link to the Past speedrun, Vinny gets something incredibly disappointing in place of the Magic Mirror.