Characters / The Legend of Zelda: A Link to the Past 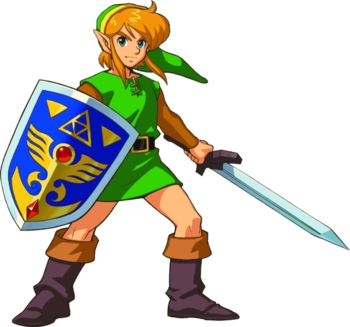 Voiced by in Sound and Drama: Hikaru Midorikawa
Voiced by in the GBA port: Fujiko Takimoto

This is the first Zelda game to introduce a new Link. At the start of the game, Link is a boy living with his uncle who receives a telepathic distress call from Princess Zelda. Though ordered to remain in his home, destiny and courage inevitably draw Link into a journey to save all of Hyrule.

A member of the Hyrulean royal family and a descendant of the Seven Sages. Zelda is the last of the Seven Maidens to be captured by Agahnim to break the seal on the Dark World. She telepathically contacts Link to ask him to rescue her, which starts him on his journey to defeat the evil wizard. This version of Zelda was used as a basis for her appearance in Super Smash Bros. Ultimate, albeit as a Composite Character with her very similar A Link Between Worlds incarnation.

Seven young women who inherited the power of sealing from their ancestors, the Ancient Sages who helped seal Ganon. Agahnim imprisons them in the Dark World in order to break the seal on Ganon. 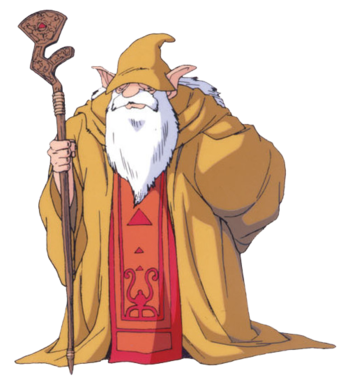 The elder of Kakariko Village and a descendant of one of the sages who sealed Ganon. He serves as Link's guide through the game, communicating with him through telepathic tiles (though it seems as though touching the tiles just notifies him of when his assistance is needed, because when Agahnim sends Link to the Dark World Sahasrahla telepathically communicates with Link regarding his current situation despite there being no tile in sight). 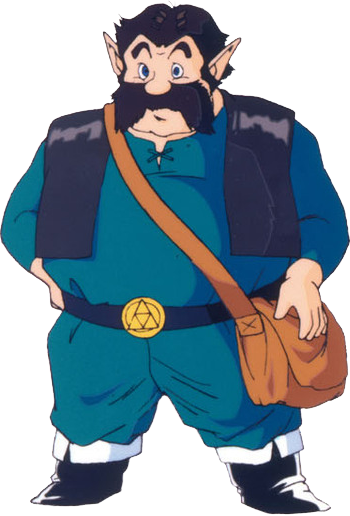 Voiced by in Sound and Drama: Daisuke Gōri

Link's uncle heard Zelda's telepathic message just as Link did and went to rescue her, but was overwhelmed by Agahnim's forces. 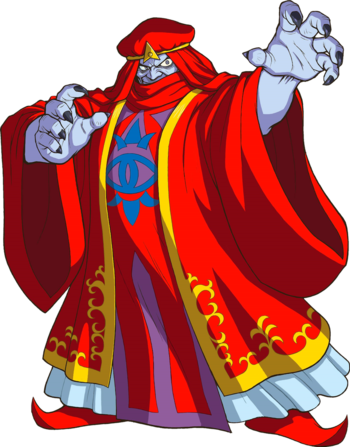 "Ho ho ho... with this, the seal of the seven sages is at last broken. It is now only a matter of time before evil power covers this land completely... after all, the legendary Hero cannot defeat us, the tribe of evil, when we are armed with the Power of Gold. Ho ho ho... now, I must go!"

The main antagonist of A Link to the Past. He is an Evil Sorcerer who masterminded a plot to conquer Hyrule by appearing to be its savior. The king is naturally a Horrible Judge of Character and makes him his adviser. Through false allegiance and his powerful sorcery, he took control of Hyrule Castle and used the brainwashed soldiers of Hyrule in order to pursue his objective. Agahnim seeks to banish 7 maidens descended from ancient sages to the Dark World so the seal placed by the sages can be broken. When the seal is broken, evil power will cover the land and an ancient threat will rule the world as it intended to long ago.

Unrivaled in terms of magical ability in all of Hyrule, in control of the nation's army and unable to be directly harmed even by the land's blade of legend, Agahnim appears to be unstoppable. 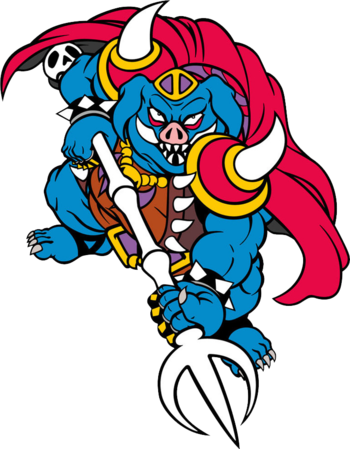 Voiced by in BS The Legend of Zelda: Ancient Stone Tablets: Seizō Katō
"You are doing well, lad. But can you break through this secret technique of Darkness? En garde!"

Once the leader of a tribe of thieves named Ganondorf Dragmire, Ganon invaded the Sacred Realm along with his followers in a bid to gain the power of the sacred Triforce. After slaughtering his followers, he grabbed the Triforcenote Hyrule Historia later changes this to explain that Ganondorf defeated the Link and Zelda of Ocarina of Time and took their Triforce pieces and used its power to twist the Sacred Realm into a reflection of his desires as well as turn himself into an all-powerful demon. The Knights of Hyrule fought against him and the Sages sealed him within the Dark World. Agahnim aims to unseal him from the Dark World in order to allow him to try to conquer Hyrule once again. 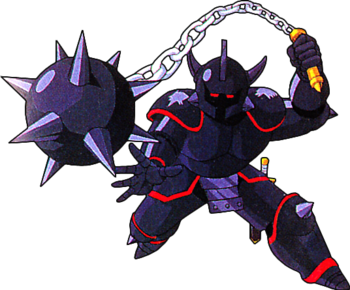 Upon taking control of Hyrule Castle, Agahnim brainwashed the ones guarding it into doing his bidding. They serve as common enemies in the Light World. 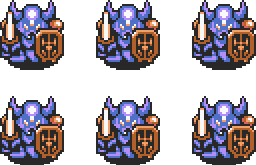 The boss(es) of the Eastern Palace. 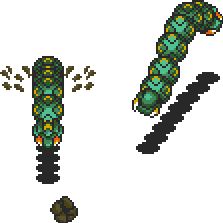 The boss(es) of the Desert Palace.

The boss of the Tower of Hera. 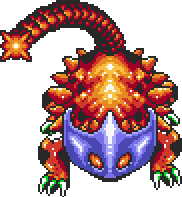 The boss of the Dark Palace.

The boss of the Swamp Palace.

The boss of Skull Woods.

The boss of Thieves' Town.

The boss of the Ice Palace.

The boss of Misery Mire. 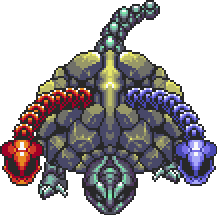 The boss of Turtle Rock.

The final bosses of the Palace of the Four Sword, dark reflections of link. There are four of them in total, dressed in green, red, blue, and purple, respectively.

A fairy that Link meets in the Ishinomori manga, while in the Dark World.
Roam

The descendent of another line of Hyrule Knights, he runs into Link in the Dark World. He's more focused on defeating Ganon than rescuing Zelda, and finds the idea that the immature and hotheaded Link could be the hero of legend laughable. He appears in the Ishinomori manga. 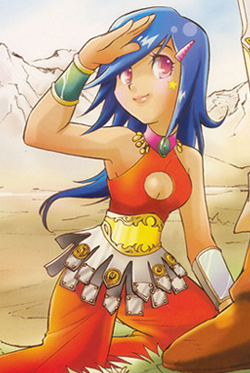 A bandit made up for the Akira Himekawa manga, who ends up joining Link.