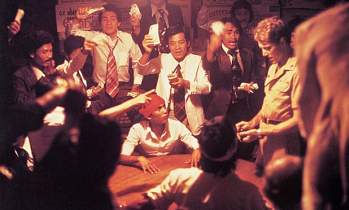 A social, genial gentleman, fond of company and a glass... who invites his friends at night to refresh themselves with beer, but has in the room, besides barrel and bottles, a table suitable for gaming, together with eleven packs of cards and two boxes of "chips," one containing eighty chips and the other three hundred, and a memorandum book with names and numbers entered in it, and whose guests, or some of them, retire hurriedly under the bed on being surprised by a visit from the police at one o'clock in the morning, may or may not be guilty of the offence of keeping a gaming-house. A verdict of guilty based on these and other inculpatory facts, such as the rattle of chips and money, and some expressions about seven dollars and twelve dollars heard by the police on approaching the premises, is warranted by the evidence, and is not contrary to law.
— Pacetti v. The State of Georgia, 82 Ga. 297; 7 S.E. 867 (Ga. Sup. Ct. 1888)
Advertisement:

These dens can range from being otherwise indistinguishable from legitimate enterprises, to where people can bet on Deadly Games and Blood Sport. In that case it will likely heavily overlap with Fight Clubbing.

Even the ones that look no different from legitimate businesses could actually be a way for the operators to get their victims Trapped by Gambling Debts and threaten financial ruin if they don't do dangerous or illegal things for them. Compare the Loan Shark in this case.

Often found in a Friendly Local Chinatown, and may overlap with a Bad-Guy Bar if not a Legitimate Businessmen's Social Club. Also a common source of income for organized crime such as the Yakuza, The Mafia, and other Generic Ethnic Crime Gangs.