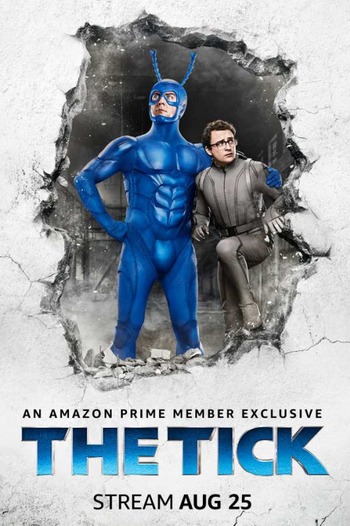 The Big Blue Bug of Justice is back.
"Hello world, this is The Tick! Don't worry—I'm not in outer space. I'm not even in this yet! But I know what's coming—an epic tale, rife with destiny, adventure and blood loss. The ultimate struggle of light against darkness. Of good against evil. Of...neat."
— The Tick
Advertisement:

The Tick is a 2016 Amazon Studios original series based on the comic book by Ben Edlund.

In a World… where superheroes have been a thing since a huge space object plunged into the Tunguska River Basin back in 1908 during what became known as "the Dawn of the Age of Superheroes", mild-mannered (if mentally troubled) accountant Arthur Everest (Griffin Newman) is following what he believes is the secret trail of The Terror (Jackie Earle Haley), an infamous super-villain many believe was already killed years ago by Superian (Brendan Hines), the first superhero.

Arthur comes to the conclusion that the Terror is running The City from underground. However, as he tries to blow the lid off the conspiracy, things take a turn for the bizarre when he inadvertently sparks the interest of a big, blue, nigh-invulnerable, shamelessly hammy and rather enigmatic superhero who calls himself The Tick (Peter Serafinowicz). But can Arthur and The Tick really save The City from its own seedy underbelly? Or are the two of them (especially Arthur) truly in over their heads?

Obviously this series is not in continuity with the 2001 series of the same name, though Patrick Warburton does return in the role of producer, and that show's executive producers had their credits carried over.