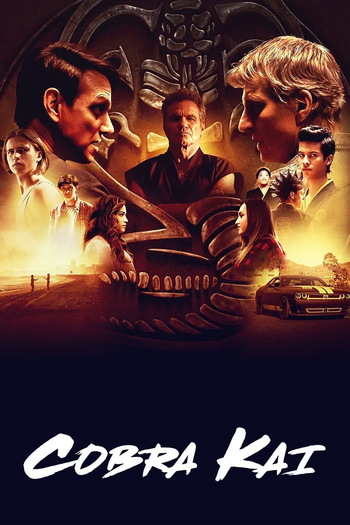 "STRIKE FIRST! STRIKE HARD! NO MERCY!"
"Cobra Kai is not a hobby. It's not a club. Cobra Kai is your brothers and your sisters. You are all Cobra Kai for life. Because Cobra Kai never dies."
— John Kreese
Advertisement:

Cobra Kai is a Fighting Series/Dramedy that premiered on May 2nd 2018 on YouTube Red, later renamed YouTube Originals. It later moved to Netflix, which distributed the third season and took over production for the fourth season and beyond. It is a distant successor to the Karate Kid trilogy.

Since Johnny Lawrence (William Zabka) was beaten by Daniel LaRusso (Ralph Macchio) in the final round of the 1984 All-Valley Under 18 Karate Tournament, he has had a fall from grace. He has gone from the star student of the Cobra Kai dojo to being a much-abused handyman living in squalor who also neglects his son Robby Keene (Tanner Buchanan). Down on his luck, he rediscovers his talent after saving his new neighbor Miguel Diaz (Xolo Maridueña) from a Gang of Bullies. Seeing an opportunity, he decides to re-open the Cobra Kai dojo and personally takes Miguel under his wing.

Meanwhile, Daniel LaRusso is now a Happily Married father of two who runs a chain of car dealerships, but is having trouble communicating with his teenage daughter Samantha (Mary Mouser), who begins to fall in love with Miguel after he uses his martial arts training to stand up to some bullies who are harassing her. Worse yet, ever since the death of his sensei, Mr. Miyagi, Daniel has found trouble keeping balance in his life — and the return of Cobra Kai is the last thing he needs.

This is a story about two men with decades of resentment between them, addressing their respective demons in the only way they know how: through martial arts.

The first two seasons can be viewed here

. The first two episodes are free and can be viewed without a subscription. A second season, also spanning 10 episodes, premiered on YouTube Premium on April 24, 2019; the first episode is free, although it was all temporarily available in late 2019. The teaser trailer for it is available here

. The full trailer for Season 3

To tie in with the series, IDW published Cobra Kai: The Karate Kid Saga Continues, a four-part comic that features Johnny retelling events of the original movie to his students from his Sympathetic P.O.V.. A Beat 'em Up video game adaptation of the series under the same title, developed by the Brazilian studio Flux Games

Also has a recap page.

"You are all Cobra Kai for life because Cobra Kai never dies."
Feedback

"I'm Gonna Be Somebody"!

Miguel increasingly become more healthy and able in his physical physique whilst exercising to recover from his disability. Eventually, he throws his crutches and wheelchair into the garbage once he nearly fully recovered, complete with WASP's "I Wanna be Somebody" playing in the background.

Example of:
Throwing Off the Disability

"I'm Gonna Be Somebody"!

Miguel increasingly become more healthy and able in his physical physique whilst exercising to recover from his disability. Eventually, he throws his crutches and wheelchair into the garbage once he nearly fully recovered, complete with WASP's "I Wanna be Somebody" playing in the background.