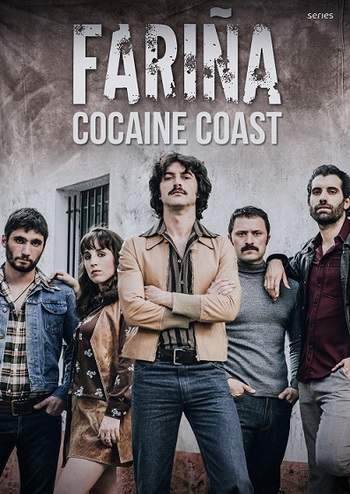 A minuscle part of the cast.note From left to right: Javi Bustelo, Leticia Charlín, Sito Miñanco, Oli and Roque.
O que teño que facer para non ter que ir ao mar /
Sobra peixe que vender e fariña para amasar
—Intro themenote The things I have to do to not go out at sea / There is surplus fish to sell and flour to knead/amass
Advertisement:

Cocaine Coast (also known as Fariña: Cocaine Coast and by its original title Fariñanote Galician slang for cocaine, meaning "flour") is a Spanish miniseries that chronicles the history of the drug trade in Galicia's Lower Rias during The '80s, from its origins as a simple Portuguese tobacco smuggling operation to the involvement of violent Moroccan and Colombian drug cartels seeking an entry point into Europe, and the arrest of most local drug barons in the so-called Operación Nécora of 1990. The series is based on the nonfiction book Fariña: History and indiscretions of the drug trade in Galicia (2015) by Corunnan journalist Nacho Carretero, although it is not without licenses for legal and narrative reasons.

The ten episodes aired for the first time in Antena 3 on the Spring of 2018. After critical and public acclaim (and also a little Streisand Effect, due some minor "characters" suing either book or series for defamation), the series was also made available at Netflix.