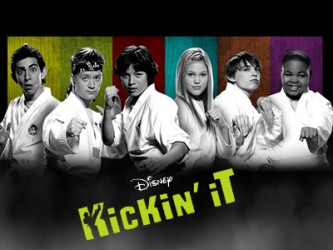 L to R: Jerry, Rudy, Jack, Kim, Milton, Eddie.
We swear by the light of the dragon's eye,
to be loyal and honest, and Never Say "Die".
WASABI!
Advertisement:

Kickin' It is a Disney XD comedy TV series about martial arts created by Jim O'Doherty that ran for four seasons from June 2011 to March 2015.

The series focuses on the Bobby Wasabi Martial Arts Academy, located in a Seaford, CA strip mall, which has the unfortunate reputation of being the worst dojo in the already-underperforming nationwide Bobby Wasabi chain. To improve the dojo's image, a group of underdogs — including a newly-recruited high school student named Jack — bands together, learning lessons about life, friendship, and karate along the way.