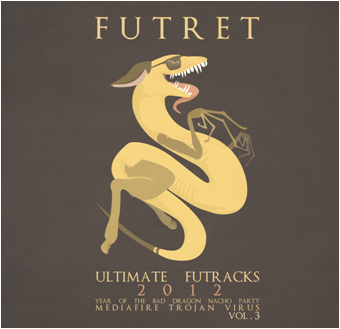 HEY, SAUCY STALLION! YOU LIKE GOOD TUNES? TOO BAD!
—Former Tagline from his bandcamp
"My ears are bleeding in the best way."
—justice9000note (a YouTube user), on "Conté Hit & Run"

Futret was a character by and handle of South London dubstep/breakcore artist Tom Bennett, who hosts a number of other online-personas. He had produced a few early tracks under the name of alienfingers.

) was also run by him under the name of NetherLips. His art mainly consisted of parodies of My Little Pony: Friendship Is Magic characters, which he renders in a style that has been called "marshmallowy moe-blobs". but also some separate fanart, such as Sweet Bro and Hella Jeff, and some of his own characters. He had proposed concepts for deer and other furry Original Characters on his deviantART and ideas for backgrounds, but a full story was never completed in time.

Major inspirations for his music include anime and Japanese culture, Sweet Bro and Hella Jeff-type satirical media, and the Furry Fandom. He is probably best known for his work with Renard Queenston on GABBERSTÄG, and in Friendship Is Magic fandom for his tribute album to Cupcakes.

Tropes that apply to Futret: