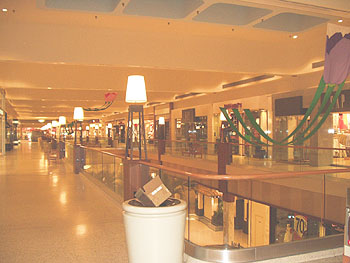 "Every day's great at your Junes!"
— Junes jingle, Persona 4
Advertisement:

A stock setting for any work set in suburbia, the Mall can be seen as the modernized version of the Main Streets that populate Everytown, America. Stores lined up along clean(ish) hallways populated by teenagers, parents with kids, and elderly people who have little better to do than walk around the mall all day. Will usually have a movie theater, a central meeting place (often with a fountain), boutiques and department stores that are out of the price range of the working class but still not luxe enough to be considered "classy", the occasional video game arcade and a food court. A job at a mall store is usually treated as second only to working in fast food in the hierarchy of Most Humiliating Jobs for Teenagers. (Bonus points if they work at a fast-food restaurant located in the food court.) The security guards are all guys who washed out of (or were rejected from) basic training or the police academy, have an inflated sense of entitlement, and have nothing better to do than harass our heroes over trivial matters.

Like its close cousin, suburbia, the sterility of malls has often been used for the purposes of social commentary, satirizing the corporatization and consumerism of American society, and has frequently been employed as a symbol of mainstream conformity (especially in youth-focused works) and the destruction of the "little man" by big chain stores.

In older works or in early-mid 20th century period pieces, a department store is likely to serve the same purpose, albeit in a somewhat more idealized fashion (Nostalgia Filter and all).

The natural habitat of the Valley Girl, Zombies and, come Christmas time, the Mall Santa, and the destination of choice for a Shopping Montage. This setting is best portrayed in The '80s, when malls were at their zenith, since many malls have since gotten rid of the neon and fountains that were featured in that decade. Although there are still plenty of successful malls that have undergone multi-million dollar renovations to stay on top of the heap, very many are in declinenote A 2017 report by a Swiss banking firm reached the conclusion that up to 25% of the malls in the US are not financially stable and are likely to close within five years (so-called "dead malls") with competition from "big box" stores and online shopping — to say nothing of a bad economy and a new generation moving back to the cities in droves. Regardless of their current state, the mall is increasingly looked upon with a sense of nostalgia, and as such, films that either focus on a mall setting, or feature a mall prominently, are beginning to be seen as period pieces.

Compare and contrast Bazaar of the Bizarre, Predatory Business.