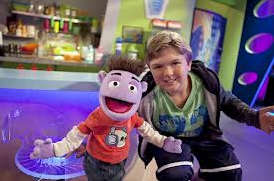 Wyatt and Crash, the two main characters.
Crash & Bernstein was a short-lived 2012 Disney XD tweencom, and a mix of live-action and puppetry. Created by Eric Friedman, the series centers around a teenaged son, among three sisters, who wishes to have a brother. For his birthday, Wyatt Bernstein is taken to a Build-A-Bestie store where he creates a puppet that he names Crash, who comes to life as the brother he always wanted. Crash and Wyatt must deal with three sisters of various ages at home, as the two might have their differences like what other brothers do, but they still have each other's back.
Advertisement:

The series was quietly canceled after about two seasons; a spin-off/Retool called Commando Crash was developed but not picked up. Landry Bender, who plays one of the sisters has since gone on to star in the Disney Channel series Best Friends Whenever.

"Let me trope about the Bernsteins!":