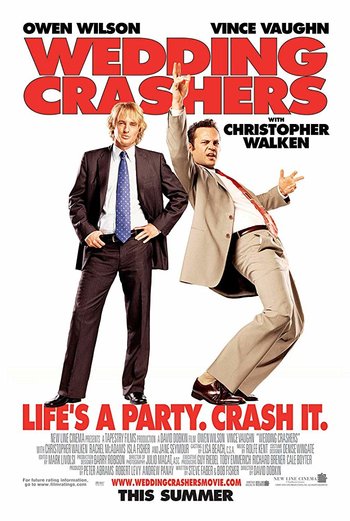 They're coming to your wedding—with or without invitations.
Advertisement:

Wedding Crashers is a 2005 comedy directed by David Dobkin and starring Owen Wilson and Vince Vaughn. Bachelors and lifelong best friends, John Beckwith (Wilson) and Jeremy Grey (Vaughn) are partners at a law firm in Washington D.C. who frequently "crash" wedding parties to meet women; working from a set of rules taught to them by a past "crasher", the duo always have cover stories for inquisitive guests and inevitably become the hit of every reception — all so they can charm their way into bed with ladies at the wedding for a one night stand.

After a sequence of successful "crashes," Jeremy spots the wedding of the daughter of the Secretary of the Treasury William Cleary (Christopher Walken) and his wife, Kathleen (Jane Seymour). After infiltrating the lavish event as brothers, John and Jeremy set their sights on two bridesmaids, also daughters of Secretary Cleary: Claire (Rachel McAdams) and Gloria (Isla Fisher). This 2005 film is the very definition of...you know.

Not to be confused with The Wedding Crashers; they both involve weddings being crashed, but that's about it similarities-wise. For the otherwise unrelated trope formerly named after this movie, see Wedding Smashers.