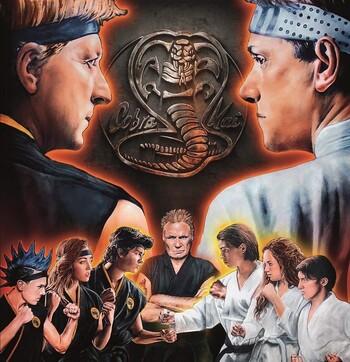 Waitress: Do you two know each other?
Amanda: Oh, they have warring karate dojos.
— Cobra Kai (in a nutshell)
Advertisement:

A pair of rival schools of martial arts, run by a pair of masters who have probably been feuding for years before the series even started. If dojo is applied to non-Japanese martial arts, its use is an example of the Interchangeable Asian Cultures trope.

Most often, but not always, the two masters were students of the same martial arts style before branching off to different styles: the protagonist usually (but not always) learning under the benevolent master who teaches wisdom and self defense, while the rival school is run by an Evil Mentor who encourages its students to be ruthless, aggressive and brutal. A tough Sensei for Scoundrels who takes the pragmatic middle-of-the-road approach could substitute for either of them.

A subset of this trope comes in the form of members of one school (or even an unaffiliated challenger looking to show his prowess) going to the other dojo and challenging the sensei or top student to a match, usually as an excuse to then completely ransack the dojo, maim everyone inside, and steal a memento of their victory (typically the dojo's marquee). This kind of act, whose exact term is dojoyaburi

(道場破り, "dojo storming"), is Truth in Television, and there are stories about brutal dojo wars in historic Japan and more recently in the Brazilian vale tudo scene.

Very often comes up in Fighting Series (with an Elves vs. Dwarves bent). This situation often involves or ends with the main students from both schools eventually becoming friends or at least allies (usually after one of them defeats the other), effectively ending the feud, or turning it into a friendly rivalry (if it wasn't already) instead.