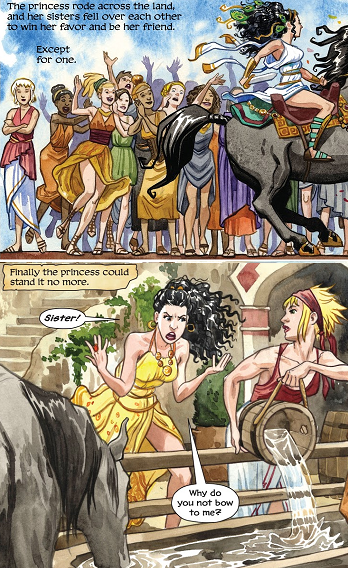 "Well excuuuuuse me, princess!"
"Don’t focus on the one guy who hates you. You don’t go to the park and set your picnic down next to the only pile of dog shit."
— $#*! My Dad Says
Advertisement:

Alice is fairly popular and well-liked by everyone around her, but then she discovers that there's one person that just doesn't like her. She freaks out because she must be loved by everybody. "How can Bob not like me? What's not to like?" Alice may go through every single event of her life trying to figure out what might have offended him. Sometimes, this type of story is used to teach the audience An Aesop that "You can't please everyone," but other times Hilarity Ensues.

For some reason, Alice never wonders why she even wants to befriend someone who's consistently rude to her and blows her off despite her kindness. At best, she could be genuinely hurt if it's someone she has to interact with on a regular basis. At worst, it's less about the other person and more about her pride. Her attempts to reverse this dislike will only succeed in really giving the other person a reason to hate her.

It may sound like Alice is an attention-starved narcissist, but this trope doesn't always reflect poorly on her. You don't have to be best buddies with someone to show them basic politeness, which Bob refuses to do. If she is of a different race, religion, sexual orientation or nationality than he is, there may be implications—real or imagined—that he's prejudiced. Alice's attempts at reaching out to him can teach a "Bigotry is bad" aesop if he comes around—or if he doesn't but everyone else finally sees him for the jackass he is. But if he isn't a bigot and has legit reasons to dislike her, then he certainly won't take kindly to her accusations and she can forget ever being his friend (or, albeit rarely, he might realize how he comes across and try to be nicer to her).

Doing this in Real Life can be the result of narcissism or sociopathy, but it can also be caused if "Alice" has been emotionally abused, bullied, or otherwise personally or socially ostracized in the past and they're finally in a positive environment where they're well-regarded. This can make what happens to them even more tragic, especially when they see it as only trying to protect themselves from abuse or placate haters — and as a result ends up drawing even more abuse and ostracism for falling into this trope.

Related to Unrequited Love Tropes, if the hero romantically pursues the one person who can't stand them, which can range from "sweet if hopeless" to "You're only doing this for the Forbidden Fruit, aren't you?" to "Stalker with a Crush."

Contrast Enemies Equals Greatness, where someone likes that they have the contempt of others, and Only One Finds It Fun for when only one person likes something. Compare Jerkass to One, which is this trope from the opposite angle.

Bea finds out Albert Glass doesn't like her, which makes her freak out.

Bea finds out Albert Glass doesn't like her, which makes her freak out.