Series / The Sifl and Olly Show 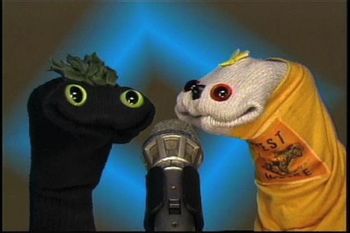 The Sifl and Olly Show was a comedy show on MTV with sock puppets, animation, and music. Created and performed by musicians Liam Lynch and Matt Crocco, friends since childhood. The show aired from 1997 to 1999.

The two main characters are a black sock puppet named Sifl and a white sock puppet named Olly. Sifl is the calmer (though less responsible) leader of the show, while Olly is excitable and often breaks into crazed furies. Their assistant Chester is shy and often incoherent, and claims to be great at everything. Only puppets appear on the show, except during Precious Roy's hamster sale.

The show is always very simple and low-budget, showing only the characters and background images or animation. The two co-hosts often have a microphone in front of them. The show has an extemporaneous unscripted feel, with the characters talking to each other in a realistic, conversational style. Sifl and Olly sing both original and classic songs throughout the show, with an original song at the end. Though it featured sock puppets, the series was not intended for children. The humor often featured profanity, surrealism, sexual references, drug innuendo, crude humor, bodily functions, and violence.

Regular segments included "Precious Roy's Home Shopping Network," where Olly would briefly lose what sanity he had left to sell very dangerous or impossible products to people; "Calls From the Public," which is exactly what it sounds like (and always includes a call from their landlord who threatens to evict them for some very weird reasons, like collecting monkeys and building a waterpark); "A Word with Chester" (later "Letters to Chester") where Olly would spend a little time talking to Chester, since he wanted to give him a spot on the show; and finally "It's Almost the End of the Show!" where the duo would sing a song, many of which were recycled into the "Kickin' It Old School" segments of Season 2.

Starting in September 2012, the show has been revived as a "review" show on YouTube. The first "season" was on Machinima's account, but now the second has started on the Nerdist channel. Watch the initial trailer here.

in working with the Sifl and Olly license, and Liam Lynch responded approvingly, but whether or not anything will come out of it remains to be seen.

Example of:
Don't Fear the Reaper