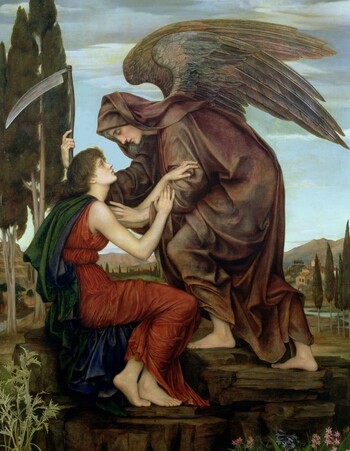 For millennia, humanity has feared death, and understandably so, all things considered. Therefore, when personifying it, the result was often pretty terrifying. However, there has also been a very different attitude at times, with various writers and artists creating a personification of Death who is not only not scary, but friendly, compassionate, and otherwise the sort of person you'd want to find waiting for you at a difficult time like that.

This sort of Death won't glare at you with Glowing Eyelights of Undeath from underneath a Black Cloak while carrying a scythe (well, some might, but purely because it's expected of them); they will dress as a Perky Goth or take on A Form You Are Comfortable With. They won't challenge you to chess, but will instead be your best pal (before you die, even!) if you give them half a chance. Friendliness notwithstanding, picking fights with Death is still something the challenger will regret.

Sometimes this overlaps with Beleaguered Bureaucrat, when they are friendly but nonetheless has a long list of people to get through today and doesn't have time to deal with every decedent's requests.

The Trope Namer is the eponymous song by Blue Öyster Cult from Agents of Fortune, which is a song about how true love can last even after death, and not, as some seem to think, about anyone committing suicide. Nor is it about more cowbell.

Often applied to Psychopomps, the God of the Dead and The Grim Reaper. Contrast with Everybody Hates Hades, when authors do the opposite with death-related deities. Is often a Friendly Skeleton. Compare also Friendly Ghost and Friendly Zombie. Distant cousin to The Devil Is a Loser. Compare Not Afraid to Die and We All Die Someday, which is about not fearing death itself rather than its personification.

Alternative Title(s): Do Not Fear The Reaper