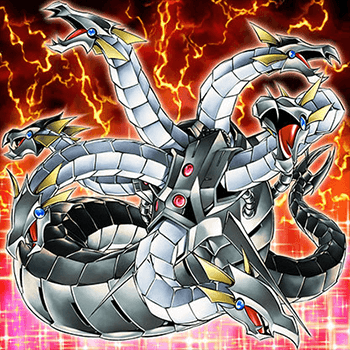 Many fictional creatures, such as dragons, griffons, merfolk and so on, are generally thought of as belonging to the Fantasy genre and its derivatives, and thus aren't usually associated with tropes pertaining to science or technology. However, it's not unheard of for them to appear as sci-fi variants of themselves when fused with technology, ranging partly organic Cyborgs to outright robotic fantasy beasts.

This can serve as a way to include fantastic creatures in Science Fiction, Space Opera or Steampunk settings where their presence would otherwise be thematically jarring: a magic, flying, fire-breathing or magic-slinging monster from folklore may not gel well with the basic conceits of a scientific or pseudo-scientific adventure, but if a work already includes complex, functional robots as a common setting element, there's nothing really stopping people from modeling them after whichever real or fictional creatures they want to. Likewise, things like built-in flamethrowers, antigravity or flight systems, lasers or nanotech can go a long way towards justifying common fantasy creature tropes and abilities in settings where saying that A Wizard Did It isn't generally an option.

Of course, cybernetic mythical monsters can be included for no deeper reason than the fact that they look cool.

See also Mechanical Monster, for when robotic beings are portrayed as powerful and monstrous foes, a trope with which this can easily overlap. Often a source of or the result of Post Modern Magick. Compare Deus Est Machina, i.e Cybernetic Gods, and Mechanical Abomination, which Cybernetic Gods often are.