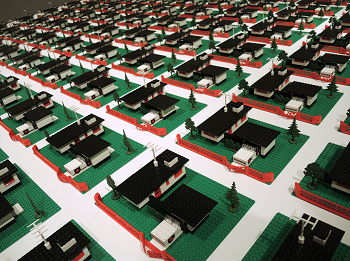 Ctrl-C, Ctrl-V, Ctrl-C, Ctrl-V...
"The houses in the outskirts were all exactly alike, small square boxes painted gray. Each had a small, rectangular plot of lawn in front, with a straight line of dull-looking flowers edging the path to the door. Meg had a feeling that if she could count the flowers there would be exactly the same number for each house."
— A Wrinkle in Time
Advertisement:

After World War II, the veterans came home, married, and bred, creating the Baby Boom in the United States. Houses were needed. Lots and lots of houses. Entire neighborhoods were built with houses only slightly different from each other. Minor variation in detail from house to house only accentuated the similarities and made each neighborhood hopelessly dull. The yards are also uniform. One common tactic to make them look different is flipping the blueprint, as if having the garage on the left instead of the right would create visual interest.

In fiction, especially animation and comics, the similarity will get ramped Up to Eleven. The houses, gardens, cars will be identical. The lives of the residents may be identical or the point may be that their lives are different, even if their houses are the same.

Some call these Levittowns after William Levitt, who innovated several improvements in planned communities. To this day there are many cities named (officially or unofficially) Levittown (list at Wikipedia here

), the presence of one in Puerto Rico shows how far William Levitt's influence extended.

Wikipedia uses the term "tract housing" because a whole line of them is built at once while recognizing the American and Canadian slang term "cookie-cutter housing". "Development" is a more general term, used when things beyond just the houses are planned out at the start. Often this includes more complicated street patterns, gated communities, and usually a little bit more variety in house design (but not by much).

Similar communities exist throughout North America, Great Britain and the rest of Europe, but the degree of conformity may differ.

This is a common trait of the Stepford Suburbia. See also Standardized Sitcom Housing.