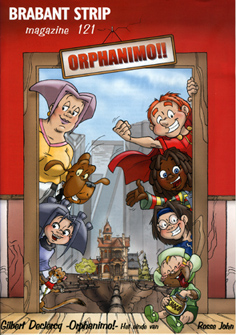 The main characters of the series. From top to bottom, left: Alice, Bruno, Trish, Minky. Right: Vic, Gri Gri, Sharp, Jayjay
ORPHANIMO!! is a Belgian comic book series, consisting of 2 series of 6 albums each. All albums follow a continuing storyline, with each new album starting where the previous one left off.
Advertisement:

The main plot is about an orphanage in the center of an unnamed city. It is owned by a lady named Alice Rosebud. After she lost the love of her life, Jim Jim, 30 years ago during a storm at sea (he was an environmentalist who was protesting against the illegal activities of an oil company), she turned her house into an orphanage. At the start of the series, only five orphans are still living with her: Victor, Stephen, Jan Jakob, Patricia and Grimelda (although they nickname themselves Vic, Sharp, Jay Jay, Trish and Gri Gri). They consider the orphanage to be their only true home, and Alice to be their mother. Therefore, they sabotage every attempt of her to find them adoptive parents.

The orphanage is threatened by a rich and powerful industrial named Vallalkozo, who has already demolished almost the entire original city center and replaced all the buildings with skyscrapers. His latest plan is to build a colossal V-shaped building to top it all off, but he needs the ground the orphanage stands on to do so. Alice however wont’ sell her ground and the orphans are not afraid to mock or challenge Vallalkozo. The situation soon escalates, and Vallalkozo has the orphanage isolated from the outside world by digging away all the ground around it (which he already owned, leaving the orphanage on a small pile of ground suspended above a deep pit by the sewer pipes. In a twist of events however, when Vallalkozo and Alice first meet face to face, Vallalkozo instantly falls in love with her. This makes it harder for him to continue his attempts of buying the orphanage. Meanwhile, his assistant Hanz is secretly plotting to take over Vallalkozo's company behind his back.

At the end of the first series, the orphans save the orphanage by attaching it to a giant air balloon (which Vallalkozo ordered in an attempt to move the house without demolishing it in an attempt to get on Alice's good side) and lifting it into the sky, planning to take it to someplace else. They also take Vallalkozo’s dog with them since she has fallen in love with their dog, Bruno. They don’t know however that the microchip containing the blueprints for the V-building is in her collar. Therefor Vallalkozo and Hanz go in pursuit of the fleeing Orphans with the (unwilling) help of the rivaling brothers Orville and Wilbur Blériot and their hot air balloons. The second series is all about the attempts of the orphans to reach an island Vallalkozo has given to Alice. Along the way, Vallalkozo, Hanz and the Blériot brothers crash on a stranded war ship and are presumed dead for a while, and the orphans accidentally end up at the north pole. Once they reach their island, they are confronted with Z-Oil, the oil company that Jimjim was protesting against 30 year ago, and its owner, Douglas Zemeckis. It turns out one of their drilling rigs is near the island. Moreover, there are some illegal activities going on on the drilling rig, as Z-Oil is secretly working on the creation of a luxury resort on the planet Mars, using rockets powered by nuclear waste to get there. Vallalkozo's ex-wife Ursula has a hand in the plan as well.